Should I extort a salary raise out of my boss?

In the August 6, 2019 Ask The Headhunter Newsletter a reader wants to use a job offer to get a raise.

A competitor offered me a job with a higher salary. What is the best way to use this to ask my boss for a raise, and what could be the best speech to convince him? 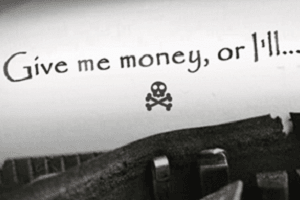 Using a new job offer to leverage a counter-offer — a raise in salary — from your current employer is almost always a costly mistake. In fact, it’s a kind of extortion, so let’s call it that, and let’s consider some of the risks you could face.

Even if this gambit works, you will likely be marked as disloyal and untrustworthy. The next time cuts have to be made, you’ll be on the list because you already threatened to quit over money. Management will be concerned you’ll be likely to pull this again the next time you get a better offer. (No matter how much your boss likes you, business exigencies usually trump friendships.)

If you’re using this new offer to leverage more money from your current boss, be ready to start that new job ASAP, because you may be walked to the exit immediately. Some bosses don’t take kindly to threats, no matter how diplomatically you make them.

Paying for your own raise

If you succeed in getting a raise by holding your boss over a barrel, where do you think that extra money will come from? It will likely be an advance against a future raise or promotion. You usually can’t win at this game because the bean counters are counting dollars. Most likely, you will wind up paying that raise to yourself in some way.

They want you, so be happy

But there’s good news here, too. You’ve found a new job where they want you! If you’re motivated to take a new job in a new place because you’re unhappy now, getting a few more bucks to stay (assuming you can get it) isn’t going to change the fundamental problem of job dissatisfaction. If that new job is really great for you, just take it.

Go where they’re making you happy!

If what you really want is a raise, ask your boss for it before you go interview somewhere else. Please see Should I ask for a raise one more time?

The “best speech” to give your boss is one sentence, and it should be in writing. You’ll find it here: Quit, Fired, Downsized: Leave on your own terms.

Do you want a raise, or a better job?

The bottom line is this. You need to make a choice, so compare your two options: Do you want a raise from your boss, or do you want a new job with a raise?

I’ve seen people leverage higher salary out of their current employers when they get a bigger offer elsewhere — and it works out in the long run. But it’s very rare. Such a negotiation and accommodation requires great integrity on the part of the employer and the employee.

My advice: If the work, the job, the new employer and the money are all better, just resign and move on. Don’t look back at an employer who wasn’t willing to do right by you without a threat. Don’t forgo your future.

Have you ever tried to use a new job offer to get a raise from your current employer? What happened? Is there a way to extort a raise and mitigate the risks I’ve listed? Am I over the top when I refer to this gambit for getting a raise as extortion?

Don’t miss this new feature!
News I want you to use highlights articles that can give you an edge in unexpected ways!