Protect yourself from exploding job offers

I don’t know where they’re all coming from: bogus job offers extended by employers, then withdrawn after the job applicant has relied on the offer and quit their old job. In the January 19, 2016 Ask The Headhunter Newsletter, a reader is smart enough to ask how to avoid being left without a job at all.

I’m on contract at a job through a staffing firm. I have found a better position somewhere else. The new company offered the job and I accepted. I’m trying to do this right and to protect myself, so I have two questions:

First, to whom should I direct my resignation letter? To my recruiter at the staffing firm, or to the manager of the department where I’m actually working (at my recruiter’s client)? 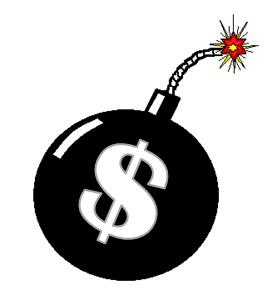 Second, I’m scared of telling whoever I’m supposed to tell, and later receiving a letter from my future employer saying that they decided to close the position for internal reasons or something like that. I don’t want to be left without any job at all.

How you quit your job matters as much as what new job you take. Let’s take your questions one at a time.

If you’re working on contract through a staffing firm, your employer is the staffing firm. You need to tell them. Of course, the right thing to do is to also tell your manager — but I think it’s best to notify your actual employer first. They should have a chance to limit their exposure by offering a replacement worker to your manager, and your manager should hear it from them.

Here’s a tip from Parting Company: How to leave your job about what to say in a resignation letter, from the section, “Resign Yourself To Resigning Right,” p. 46:

The letter should be just one sentence because — sorry to be the cynic, but careers and lives might hinge on this — it can come back and bite you legally if it says anything more.

“I, John Jones, hereby resign my position with Acme Corporation.”

I won’t get into all the things that might go wrong if you say more, but I detail the risks in the book.

Submitting your resignation is the easy part. The recruiter at your staffing firm isn’t going to be happy that you’re quitting. What will you do when the recruiter, your boss, or your co-workers press you for details? Here’s another tip from the book (p. 47):

Keep your future to yourself. It’s nice to share your new address with your buddies. But if someone thinks your new employer is a competitor, suddenly that comfortable two-week notice can turn into an immediate departure. Or worse.

How to Say It
“I don’t think it’s appropriate to disclose my new employer until I’m actually working there.”

That’s right: Disclosing where you’re going is very risky. Don’t do it.

How to avoid job offers that blow up in your face

As for being scared that the future employer may rescind — or never finalize — the offer, that can always happen. It’s a risk you take when you accept any job, because — especially in a jurisdiction where employment is “at will” — an employer can fire you at any time for any reason or no reason. But you can minimize the risk when you accept a job:

1. Make sure you have the new offer in writing. An oral offer is not good enough to risk your old job.

2. Beware of staffing firms. Is the offer from another staffing firm or an actual company where you’d be working? If it’s a staffing firm, I think your risk is bigger because recruiters will sometimes drop you if they turn up a better applicant for the client — right in the middle of the hiring process, and even after commitments are made. Likewise, the client can suddenly change its mind, and you wind up on the street. Because hiring through a staffing firm is at arm’s length, employers seem to think they have no obligation to consider the consequences for the new hire.

3. Meet the new HR manager before quitting your old job, but after they’ve promised an offer. This is a technique of personal politics. They’re not likely to meet with you if they’re not certain they’re hiring you. Insist on a face-to-face meeting with HR before you resign your old job. It’s a simple fact of social psychology: People are less likely to hurt you once they’ve met you face to face.

4. Meet your new boss. Before you quit your old job, insist on a meeting with your new boss to discuss your job responsibilities, on-boarding process, what tools you’ll be using, and so on. This forces the manager to put some skin in the game and makes it emotionally harder for them to back out — but even this is no guarantee.

5. Here’s my secret weapon. This is something I want an employer to do after it has given my candidate a job offer, but before the candidate accepts the job (or quits the old job, of course). Ask to meet some of the team members you’ll be working with. The sooner the better. This will reveal how serious they are about really filling this job and having you there. If the company balks at this, I’d never quit my old job until I’ve got some other hard evidence that the new job is for real. (For more about this, see How can I find the truth about a company?)

Limiting your risk when quitting one job and accepting another is more about personal politics than anything else. An employer (or staffing firm) can rescind an offer any time. You’d need a lawyer to fight back. I think the better strategy is to get close to the new boss and team — and to take measures to force the staffing firm to show you that the offer and the job are real. Then there’s less chance that this will go south.

Many employers — especially staffing firms — will balk at what I’m suggesting. They want to hire as effortlessly as possible. Their attitude is, “We’ve got other applicants like you waiting — we’re not going to waste our time making you feel all warm and fuzzy about taking this job.”

Well, that’s tough. Would you accept an offer of marriage from someone who won’t spend enough time with you to really make you feel loved? Don’t be in such a hurry to tie the knot before you can judge whether your suitor is for real. If an employer isn’t willing to invest time to assure you that a job offer is real, then it’s probably not worth risking your old job.

In the end, you must use your best judgment and decide whether to make the leap. If your gut tells you something is wrong, listen to your gut.

While my objective here is to help you land a great new job, my first concern is that you should not get hurt in the process. You must learn how to recognize a risky job offer before it blows up in your face.

Lately I’m getting a surprising number of questions from readers about job offers that explode — after the candidate relies on them to make career and financial decisions. I think employers, HR departments, and staffing firms have crossed a critical line that’s telling us they’re either stupid and inept, or that they’re callous and lack integrity. When the employer “takes back” a job offer for any reason, the applicant usually cannot “take back” a resignation. In one case, a reader cancelled her lease, moved her family, and wound up homeless because a personnel jockey instructed her husband to quit his job and move to a new city — then the jockey reneged on the promise of the new job.

I’m collecting stories about exploding job offers because I’m worried this is a dangerous new trend. I think we should chronicle and discuss it, to help you avoid having job offers blow up in your face.

Got a story about exploding job offers — or do you know someone who does? Please post it. Has an employer ever instructed you to quit your old job before giving you a written offer, or has an offer ever been rescinded? What did you do? How would you advise the reader in this week’s Q&A?