Should I ask for a raise one more time?

In the July 28, 2015 Ask The Headhunter Newsletter, a reader has been waiting eight years for a raise while doing loads more work.

I’m a gigantic fan who recommends Ask The Headhunter to everyone I meet. So thank you. I have a question, and if it doesn’t work for the newsletter, then I’d be good with a Talk to Nick session. 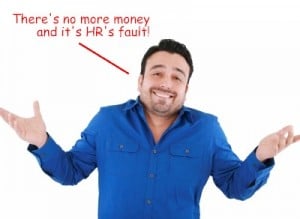 I’ve been at my job eight years. With inflation, I make about what I made in 2007. My job responsibilities have grown enormously, and I have delivered tremendous, demonstrable value. My boss and his VP agree that I’m dramatically underpaid, and they “wish” they could do more, but you know, HR is horrible, I’m at the top of the pay band, and so on.

For a few years, I’ve sweated it out because frankly I like the place, and I get to spend more time with my kids than I would at a job where I was paid fairly. The kids are priority #1, so I don’t mind making less.

It’s a small company, and there’s not much room for growth. But I’m doing a job now that is quite different from my job title, and one that doesn’t exist here. I had a very ATH conversation with our CIO (my VP’s boss) in February, and it went quite well. He said he was going to see what he could do with HR. Then he got replaced after 32 years.

The new guy seems really talented, and sharp. But my dilemma is, how do I approach him to deliver the same sort of info I already told my CIO? I’d like to let him know that I’m doing a much more important job, while being paid for a lesser job.

My bosses are not going to advocate for me. That’s just the way it is, and has been since the beginning. So I have to do it myself.

I guess I just don’t know how to approach a guy who has been here for two months, and tell him how awesome I am, and that he needs to recognize my value. It’s like an interview, but not really. Your advice is appreciated. Thanks for all you do.

Thanks for your kind words — I’m glad you enjoy ATH! You might expect I’m going to recommend some magic negotiating method, but I don’t think you should negotiate for a better salary. (If I did, I might suggest something from Fearless Job Hunting, Book 6, The Interview: Be The Profitable Hire.)

I think you should leave.

There’s an old joke: A cynical out-of-towner steps out of New York City’s Penn Station onto 34th Street and asks a passerby, “Can you tell me how to get to Lincoln Center, or should I just go F myself?”

I’m afraid all you’re doing is asking to be told to go F yourself. You’re very close to this because you’ve been there so long. If you step back, you might see this differently and a lot more simply. We tend to make excuses for people — especially our employers. I think the signs are that you need to move on.

Even if the new CIO is a great guy, he’s not likely to buck the company line. (See 5.) Even if he does, and you pull this off, (6.) tells me you’re just stalling the inevitable — unless you just want to make like a tree and take root for life. (See Should I take a big counter-offer?)

I respect that you put family at #1. That’s got nothing to do with how these people are paying you while you help generate more profits for them. It’s possible to keep doing your current work, keep family at #1, and make more money. But it’s not permitted. It seems they’ve made it clear they’re not going to pay you more.

Do you see what I see? I’m not saying jump to another company where you’ll earn more in exchange for making your family #2. I’m saying start looking for employers who value the kind of work you do and who will pay for it. Nothing is stopping you from conducting a well-paced, savvy job search. Worst case, you won’t find what you want. My guess is, you will.

I think you’re making excuses for managers who aren’t doing right by you. The new guy is not likely to rock the boat or buck your own boss.

If you go talk to the new guy anyway — and start a search at the same time — be careful. If all the managers put their heads together and realize your comp is such an issue, you may become a marked man. My guess, though, is they’re too lazy and complacent to worry about it.

Management like that just waits it out. When under-paid employees finally quit, the company just hires new ones for even less. It’s a sad commentary on how some companies are run.

“My bosses are not going to advocate for me. That’s just the way it is, and has been since the beginning.”

That tells me pretty much everything I need to know. In a healthy company, bosses advocate for their best people. They don’t resort to excuses. But what cinches this in my mind is, they’ve never thrown you a bone in eight years. That’s a bad sign. If there’s some indication that the new guy might be helpful, I just don’t see it. You’d need to explain that. 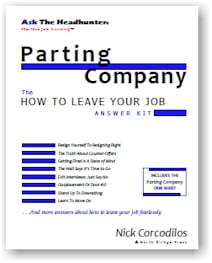 In a “talent shortage” like employers complain about today, the best talent gets hired. Why not start looking at yourself that way?

I’d be happy to schedule a Talk to Nick with you, but I’m not sure what more I could tell you — except to flesh out how to handle this new CIO. (You’d spend less learning about Parting Company properly.) The real question is, why do you think the new CIO is going to make any difference to you? Just because he’s smart does not mean he’s going to buck the rest of management. In fact, it suggests he won’t.

I believe in negotiating, as long as you’re talking with someone who is negotiable. If they’re not, then don’t beat your head against a wall. If anything I’ve said is helpful, I’m glad. Sorry if it’s such a downer, but I call them like I see them.

Would you keep negotiating with this employer? Is there an opportunity here for a salary increase that I’ve missed? What would you do in this reader’s shoes?