In the December 4, 2018 Ask The Headhunter Newsletter a reader complains that age discrimination is killing his dad’s career. 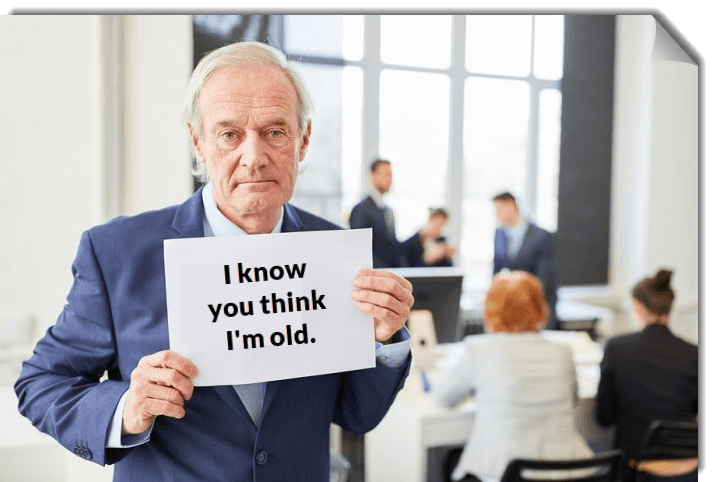 Help me market my dad. He’s over 50. It seems that as soon as his age becomes evident in a job interview he is somehow no longer qualified. Are there any businesses who hire someone with 25 years’ experience any more? He was a vice president until he got caught in a downsizing. People are still young and bring a lot to a job at his age. What can I tell him?

Have you noticed the ridiculous conundrum in the recent news about the economy?

Are we stupid, or what? (See B.S. on the jobs numbers euphoria.) There’s a problem here. Employers should be in a mad competition to hire your dad — and others like him — and they should be making insanely high job offers to get him.

But they’re not. So, what gives?

The stupidity of age discrimination

There are some bright spots — and employers — however. For example, see Boeing Is Bringing Back Recently Retired Employees in AARP magazine. It’s no accident Boeing is one of the most successful companies in the world and that it actually makes something you can touch that doesn’t run apps.
Employers are not so rational or smart as you might think. The recruiting technology they rely on — ZipRecruiter, LinkedIn, Indeed, and their ilk, along with Applicant Tracking Systems (ATSes) of many flavors — instruct employers to keep looking for the perfect job candidates, and employers (and their silly HR departments) keep barking up that tree. They don’t just discriminate against older workers. They discriminate against anyone that doesn’t match ridiculous lists of requirements.

That’s why your dad can’t get hired. Automated recruiting makes it easy for employers to discriminate because the data they need to practice age discrimination is right there in the databases they use to select candidates.

People your dad’s age (50+) bring a lot to a job. They’re not too old to contribute significantly to a company. (Check the article about Boeing in the box at right.) You clearly believe it. So does your dad.

The question is: How can your dad change his behavior in job interviews to overcome this discrimination? The answer may not be so obvious as you think.

Several years ago, when AT&T went through one if its down-sizings, the company hired me to coach a group of executives who were told they had eight months to find a new job before they were terminated. Most people take that kind of time and use it to engage in wishful thinking. You know: “Oh, they’ll find something for me so I can stay. I’ve been here 20 years. They won’t let me go.” (Quite a few AT&T’ers succumbed to that thinking and were still fired.)

One of the guys I coached (I’ll call him Mike), took it dead seriously and he started looking immediately. But by the time I met with him, he was disheartened and angry. He’d been rejected by one younger hiring manager after another. All he wanted to know was, “How do I get these interviewers past the problem of my age? They’re all much younger than me and all they see is the grey!” What Mike was saying was, “My age is a problem to them, and I know it.”

Mike was 58. Sure, some employers prefer younger people. Some employers are also bigoted about all sorts of things, from race to religion to sex to where you play golf. My advice in those situations: Either file a discrimination suit, or move on to the next employer.

But regardless of his skills and credentials, Mike was quite naturally projecting his concerns about being an older candidate trying to impress younger managers. Even as I talked with Mike and listened to his frustrations about job interviews, I could smell his fear and discomfort. It was understandable — the guy was justifiably frightened. The trouble was, Mike was essentially walking around carrying a sign that plainly said, “I know you think I’m old.”

Change your own behavior

Call me an optimist, but I really believe most managers are more concerned about a person’s ability to do the work than about anything else, and they’re basically busy people who will give you a fair shake if you can help them meet their business objectives.

I spent about four hours with Mike. I taught him to focus on one thing in the interview: the work an employer needs to have done. If the age issue comes up, I told him to shift gears and ask the manager what problems he needs fixed, and then to demonstrate how he’s going to tackle them.

You should have one goal, I told him: to show the employer what you’re going to bring to the bottom line. Do that, and you control the interview. Do that, and — much of the time, not all — you transcend the age (or almost any other) issue.

The point was not just to help Mike perform at his best. It was to help Mike change his behavior from worrying to showing he could do the work.

Controlling your behavior changes your own attitude

The truth about job interviews

A good employer wants to see what you can do. If he doesn’t ask, help him out and show him. It’ll turn your interview into a working meeting where you both roll up your sleeves, and during which the employer can do a direct assessment of your worth to his business.

“Please lay out a live problem you’d want me to handle if you hired me. I’ll do my best to show you how I’d do the work so it will pay off for both of us.”

From Fearless Job Hunting, Book 6, The Interview: Be The Profitable Hire.

Mike changed his attitude, if only because for four hours I encouraged him to talk about how he does his work, and I refused to let him discuss age discrimination. It’s a simple law of psychology. When we change our behaviors, our attitudes follow — but not usually the other way around.

A week later I ran into Mike again. He had a grin on his face as wide as a barn. He walked up and clapped me on the shoulder.

“I did what you said. Company XYZ not only hired me; they’re giving me equity. When the interview started, I cut the manager off at the pass and asked him to lay out a live problem he was facing. That helped me stop worrying. I got more comfortable by focusing the meeting on what I do best. Then I showed him how I’d handle it. We talked shop. He stopped seeing the grey when I showed him the green,” he quipped. “It changed the whole interview!”

I’m proud of Mike because he got past his own age obstacle, and in doing so he got the employer’s mind off it. When an employer encounters a perceived obstacle like age, they tend to make a superficial judgement rather than deal with their bias. So the candidate has to deal with it.

This story is the best thing I can offer your dad. He’s got to get his age completely out of the equation and out of his own mind. Sure, he’ll encounter a jerk or two. But he’ll also encounter employers who need what he can do for them. It’s up to him to communicate that without bringing his fears to the interview.

It’s not an easy task, but it’s do-able. We all know this approach will not eliminate age discrimination. We’re not going to change employers. The goal here is to eliminate the worry and preoccupation with bias that job applicants often carry around themselves. The goal is to change our own behavior in interviews. In my experience, the best way to do that is to keep an interview discussion focused on the work the employer needs done and on how you will do it profitably. Talk shop.

I wish your dad the best — and I’ll ask you to share with him this success story: Who says 58-year-olds can’t get a job?

Talking shop is one way to get past the obstacle of age discrimination. Do you agree that older job applicants can actually control the problem of ageism by controlling their own behavior? How do you think older job applicants can help employers that are desperate to fill jobs? Is it worth being angry at employers that are prone to bias against older workers? Can we change biased hiring practices?