In the May 14, 2013 Ask The Headhunter Newsletter, a reader tells how he landed a job with more money, more vacation, in short order — at age 58:

I just wanted to tell you that I got a new job. Though I got this job by responding to a posting on LinkedIn, I used some of your methods during the process. 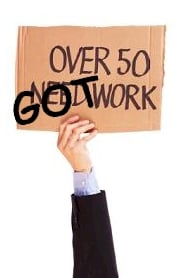 This employer required a personality test, a cognitive test, a panel interview, and a puzzle test. I had to figure out a problem during the panel interview. I also had one extra interview with the vice president. Your typical HR-centric process.

So, what did I do that followed your advice? To be honest, I was a bit upset at the testing process, but this seemed a little useless since it was a requirement and I passed all the tests easily. I decided that I would make a quick package to show how I would do the job.

I sent it to the VP.

I was offered the job with a slight raise and twice as much vacation time as my previous employer. (I should have gotten your salary book to help me with negotiations!)

Now I am going to start doing the process you recommend. I am going to do the networking and the other things you suggest. I like the point you make in How Can I Change Careers? that a person should be doing this all the time. When I need to move on, I will be ready.

To put this all in context, I was laid off from my job on March 22. I contacted these people on April 9, and got a formal offer on April 30. I just want to thank you so much. I will continue to follow you online and via subscription. I am not expecting a response. I just want you to know that on this pass I have been only a fair disciple of your methods. I promise next time I will do better. Thanks again.

Your “only fair” disciple,

Your story needs no reply, no advice from me. Just a hearty congratulations! Thanks for sharing it. Readers sometimes ask me for a “template” they can follow to their next job offer. You’re 59 — theoretically almost unemployable. Your template works! (Those looking for more about this, please check The Basics.)

I wish you the best, and I hope you’ll stay in touch to tell us about your next job offer…!

I’d love to hear from job hunters who try an approach similar to Andy’s. The steps closely follow what we discuss on Ask The Headhunter. Andy showed how he’d do the job! Do you know anyone who made a deal like this one happen?