This job offer is unreal!

In the March 13, 2018 Ask The Headhunter Newsletter, a reader waits for a job offer and for the current employee in the job to quit. 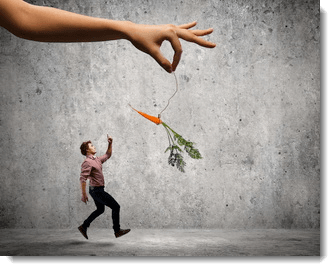 I applied for a job not too far from me. I was invited in for an interview. I went to the interview and did not hear back for two weeks. I e-mailed my potential boss to follow up and he responded by telling me something to the effect of, “I’m so sorry, I was just about to contact you and invite you in for a second interview!” So I went to the second interview and at the conclusion he said that I was one of the two last candidates and he would let me know in a week what his decision is.

I waited almost two weeks and e-mailed him back. The boss told me I’m the front runner but that the person currently holding the position revealed that he doesn’t know if he wants to leave the job. The boss is giving him 30 days to give a final answer. If the position becomes vacant, he will contact me first thing with a job offer and hire me.

He seems like a respectable person so I don’t want to read too much into it. But to you, could there be something else going on here?

After two interviews, hours of time and a considerable emotional investment, it’s natural to rationalize that there’s a real opportunity here. And there may very well be if that manager is respectable.

Is this a real job offer?

I’d love for you to actually get a job offer, but I’d also like to tell you not to throw good will after bad.

If you really think there may be a good job here for you, and you’re willing to tolerate how this manager has treated you, then I’d thank him, I’d put it on a back burner, and I’d forget about it until you have a signed offer in hand. But I would not count on a job offer in any way because he has already shown you that you cannot count on him.

I don’t see any good will from that manager. Good will would have been a phone call or e-mail that you didn’t have to chase.

The risk you’re taking is that while you wait for an unreal job offer, you won’t put your all into the next real opportunity. I’d rather you cut your losses and move on. (An even bigger risk some people take is to quit their old job before a new job offer is solid. See Protect yourself from exploding job offers.)

I don’t think this is a respectable manager. He didn’t get back to you after you invested time to interview. Then he failed to let you know his decision in a week after he promised to. Then he told you he’ll make you a job offer and hire you — if the job opens up.

What do you think are the odds you’ll ever hear from him again?

Please, move on, even if you remain hopeful.

Please don’t confuse this with my admonition to managers that they should spend at least 20%-30% of their time recruiting. That’s very different from conducting interviews and promising job offers when there’s no job!
There is no justification for a manager hedging his bets like this and making you pay for it. He’s interviewing several candidates prematurely and telling one or two they’re finalists – when he doesn’t even know whether he’s got an open job to fill!

But you’re right: There is “something else” going here. The manager has wasted your time — and every other candidate’s — inexcusably. He has misrepresented a job as “available.”

Hedge your own bet

If you insist this may pan out, that’s up to you. What you should read into the situation is this: Your best next move in your job search is to move on to the next opportunity. If this deal doesn’t pan out, at least you’ll have something else on deck. Just like that manager, who is keeping you on deck.

Be careful. This is a manager who has no qualms about wasting people’s time. He doesn’t know what his own plans are any more than he knows what his current employee’s plans are! (All we know is that the current employee seems to be holding the manager hostage.)

I understand being hopeful. Just don’t rationalize the behavior of a manager who, so far, seems to be using you. This may be helpful: Who will lead you to your next job?

How do you tell a real job opportunity from a come-on? How do you know a promised job offer may not be real? Should employers interview to fill jobs they don’t have, “just in case?” What should this job candidate do? What should the manager do?