Job candidate fires interviewers – all of them

In the February 13, 2018 Ask The Headhunter Newsletter, a job applicant takes the paddle to her interviewers.

You must get a lot of horror stories about job interviews. I’ve got some of my own, of course, but I’d love to know, what’s the worst you’ve heard? 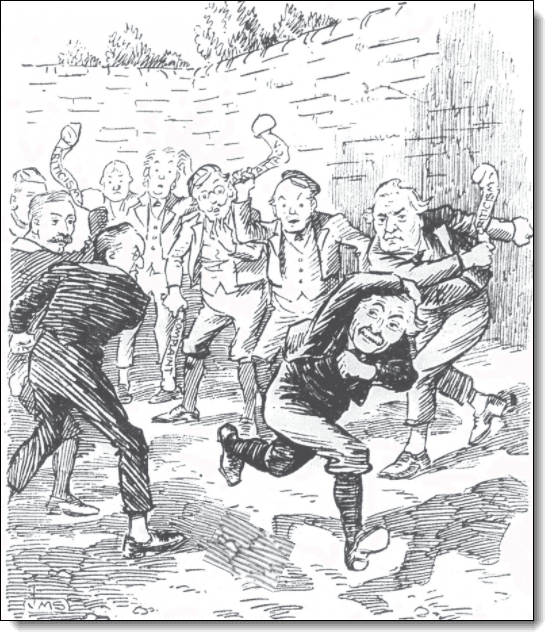 Ah, don’t bait me or I’ll start and won’t be able to stop! You’re right, I’ve heard some doozies — some of them from candidates I’ve sent to my own clients over the years. (On more than one of those occasions, I had to fire the client. That is, the employer!)

At the end of last year, as I was getting ready to put Ask The Headhunter down for a long winter’s nap so I could bake cookies (anybody know what Greek koulouria are?), put up Christmas lights and enjoy visions of sugar plums, I found a great little gift from Remy Porter that I’ve been meaning to share with you. This story also ended with someone getting fired! Needless to say, I’m putting it out there as bait, too — I’m hoping it’ll attract some of your interview war stories.

Crazed interviewers on the loose

Porter produces The Daily WTF (wish I’d thought of that!), a “how-not-to guide for developing software.” He’s a veteran developer himself, so he’s got the kind of edge I like.

The Interview Gauntlet is required reading for all employers and job hunters, not just those in the world of software. It’s about how a technical job applicant handled a series of ridiculous interview questions and the crazed interviewers behind them. This could happen to anyone interviewing for a job — and it probably has. So please listen up, because it teaches an important lesson most are loathe to learn.

If you’re an employer, you might have done something equally stupid as what Irving, a software director, did to Natasha, an earnest candidate who showed up to interview for a User Interface Developer job. (UI developers program the “look and feel” of a software application to ensure the user has a good experience.) One wonders how employers come up with so many wrong questions to ask job applicants. (Need examples? See Top 10 Stupid Interview Questions: #1-#5 and A stupid interview question to ask a woman.)

I’ll let Porter tell set this up. He does it so well.

After [Natasha survived a] gauntlet of seemingly pointless questions, it was Irving’s turn. His mood hadn’t improved, and he had no intention of asking her anything relevant. His first question was: “Tell me, Natasha, how would you estimate the weight of the Earth?”

Irving grunted and shrugged. He didn’t say, “I don’t like smart-asses” out loud, but it was pretty clear that’s what he thought about her question.

Off balance, she stumbled through a reply about estimating the relative components that make up the Earth, their densities, and the size of the Earth. Irving pressed her on that answer, and she eventually sputtered something about a spring scale with a known mass, and Newton’s law of gravitation.

He still didn’t seem satisfied, but Irving had other questions to ask. “How many people are in the world?” “Why is the sky blue?” “How many turkeys would it take to fill this space?”

After patiently fielding one confrontational question after another from a line of technical interviewers, and after Software Director Irving rudely snapped at her, Natasha finally bit back and fired them all.

She walked out of the job interview.

Interviewers are not your boss

Job applicants often forget — in the pressure-cooker of the job interview — that the interviewer is not yet their boss. The immediate job of a manager like Irving is to fill the job you’re interviewing for, or they’ve failed. When a job candidate ends the interview, the interviewer has failed.

Irving failed when he told Natasha that her attitude and behavior revealed she wasn’t a fit for the team.

“So I’ve heard,” Natasha said. “And I don’t think this team’s a good fit for me. None of the questions I’ve fielded today really have anything to do with the job I applied for.”

That was the best answer to the entire interview, because Software Director Irving failed to demonstrate he was qualified to be Natasha’s boss. He didn’t earn it.

Natasha’s story is distressing because it happens every day, with the result that good, sincere job applicants realize they’re wasting their time. Such silly, unprofessional employer behavior is why important jobs go unfilled. (This entire embarrassing episode could have been avoided if Irving and his team had asked Natasha The one, single best interview question ever.)

When a patient but forthright job applicant finally snapped, we see that the employers in this story revealed themselves to be little more than schoolyard bullies pretending to be interviewers.

Natasha displayed amazing presence of mind and candor. I wound up laughing because six self-righteous techies and their boss probably still don’t realize Natasha was interviewing them — not the other way around.

Many thanks to Remy Porter for telling this wonderfully snarky story, and compliments to Natasha for thrashing the director. I intentionally left out the best part, at the end of his column. But I’ll offer you this caution: If you go read it, deja vu may strike you down!

If you’d been in Natasha’s place, what would you have done? Was Natasha wrong? Could the interview have been salvaged? Did you go read what they finally told Natasha about the job she thought she was interviewing for? Or, can you top this? (I can’t help it. Pile on!)