New law stops firings, will catch on just ’cause

Most Americans Can Be Fired for No Reason at Any Time, But a New Law in New York Could Change That 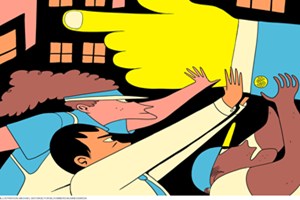 Melody Walker had just finished working the lunch rush at a Chipotle in New York City when her manager walked up and told her, in front of several co-workers, that she was fired. When the 36-year-old single mom asked him for an explanation, he said it was because she wasn’t smiling. (This was 2018, pre-masks.)

This is how the U.S. works under at-will employment, a legal standard that allows companies to fire people for almost any reason—and sometimes for no reason at all. Unlike in other wealthy countries, where bosses generally have to provide just cause for termination, at-will positions account for most U.S. jobs.

In 2018, a few months after Chipotle fired her, Walker began working with union organizers and local officials on a groundbreaking two-law package that will make New York City a little more like Europe. The laws, which take effect on July 5, ban at-will employment among the city’s fast-food businesses, meaning that from now on, Chipotle and its peers will have to provide just cause to fire one of their roughly 70,000 workers in the five boroughs. The standard requires employers to show workers have engaged in misconduct or failed to satisfactorily perform their duties.

Nick’s take on just cause

Employers knew it was coming, but they’ve filed lawsuits pretending they can stop it. We’re talking about laws that stop employers from firing employees without cause. This practice has always been unfair and uncivilized. (Attorney Bernie Dietz has explained why employment contracts are desireable.) I think New York City is just the start of this trend — employees can be fired only for “just cause,” not just because. Learn what just cause is because soon it will affect everybody’s job.