Source: The Washington Post
By Paulina Villegas  and Hannah Knowles 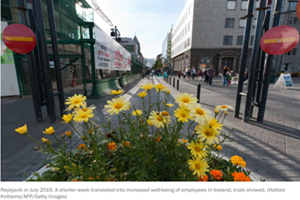 Several large-scale trials of a 4-day workweek in Iceland were an “overwhelming success,” with many workers shifting to shorter hours without affecting their productivity, and in some cases improving it, in what researchers called “groundbreaking evidence for the efficacy of working time reduction.”

Some of the trials’ key findings showed that a shorter week translated into increased well-being of employees among a range of indicators, from stress and burnout to health and work-life balance.

The trials ultimately involved 2,500 workers, more than 1 percent of the nation’s working population, who moved from working 40 hours a week to a 35- or 36-hour week, without a reduction in pay.

To be able to work less while providing the same level of service and productivity, workers and managers alike made strategic and creative changes to their working patterns and dynamics, constantly rethinking how tasks were completed and using working hours in a more efficient way.

A 4-day workweek for 5 days pay is really about efficiency. And I think we all know it. Many successful businesses seem to succeed in spite of themselves, because employees find ways to get the work done. Cut the work week to 4 days, and it seems workers figure out how to still get it all done for the same pay. Don’t miss the quote from the Stanford professor who suggests cutting the work week and cutting pay — what do you think of that?

Is a 4-day workweek really feasible? What would it take to make this happen in the U.S.?