Recruiting From The Panic Room

Recruiting has changed. In the September 27, 2016 Ask The Headhunter Newsletter, a job applicant responds to a posting and gets a call from the cops.

Employers are so out of it that they’re not only putting up digital roadblocks against people they’re trying to attract — such as online application forms and video interviews — now they’re hiding in bunkers, barring the doors, and calling the cops on earnest job applicants.

A reader found this stunning episode on an Indeed discussion forum:

I recently applied to a job on Indeed and sent a follow up e-mail a few days later. About a week passed with no response, and I sent another e-mail, saying I would come by their office. They quickly sent a response saying they no longer had a position available. Twenty minutes later I got a phone call from the police. They complained that I threatened and harassed them. I denied it, and the cop said to not contact them again. The whole thing is almost unbelievable. I hate applying for jobs.

Why doesn’t this employer just keep an armed guard posted at the door?

When you find a job posting online, can you get arrested for showing up in person at a company to apply? I’m not a lawyer, and I won’t touch that question, but such conflicted behavior and mixed signals sent by employers reveal just how dysfunctional recruiting has become.

Applying through the front door

More than once, I walked into companies I wanted to work for and gave my resume to a receptionist. Sometimes a manager would come out to talk to me. Or a personnel clerk would appear briefly. When no one appeared, I’d chat up the receptionist, collect some company literature to educate myself, and go home. Worst case, I’d write the employer off. On to the next.

If employers are afraid of who comes in the front door, why are they recruiting? Why are they in business? What if a customer shows up unannounced? Does the sales department send in its dogs?

WTF, indeed. I know many people who have taken the time and trouble to go to an employer’s office to demonstrate how serious they are about getting a job. But recruiters have so dehumanized job applicants they’re trying to attract that they no longer know how to welcome them.

Hiding from the applicants

Employers solicit such staggering numbers of people that they’re are afraid of who appears. The only way to process the incoming rush is to dehumanize and render people into database morsels. (See “How HR optimizes rejection of millions of job applicants.”) And to hide. 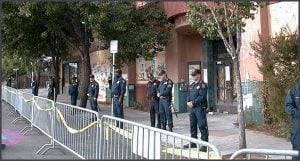 This cannot be reconciled with the idea that an employer is trying to attract you. When you’re an abstraction in a database — a mess of keywords — the assumption is that you’re to be avoided and feared, either as a waste of time or, in this case, as a physical threat.

Lest someone suggest it’s inappropriate to show up at a company after submitting a resume, keep in mind that at some point you’ll be invited for an interview at a bricks-and-mortar office that has a front door. If the front door is a locked bunker, then the job applicant who posted that story would likely just walk away — probably disgruntled. But if the front door is open for business, then it’s no more inappropriate for a job applicant to show up than it is for a customer to show up to buy something.

Recruiting from the panic room

So what does this incident mean? We must assume the job applicant did nothing wrong or threatening. After all, this person was applying for a job. They want to impress the employer — not hurt anyone — hence the visit to the office. (On the flip side, does a job applicant assume a murderous psychopath has lured them to an interview?)

When an employer worries for its safety or fears who’s going to show up, that tells us there’s something fundamentally wrong with popular methods of recruiting. It’s pretty clear that the fear and worry stem from soliciting teeming hordes of applicants that employers don’t really want. Depersonalizing and demonizing them only adds to the distrust — we naturally fear the unknown.

This incident is perhaps the most stunning evidence that the online employment system companies rely on is inherently twisted and warped. (See “Employment In America: WTF is going on?”) This job seeker’s experience reveals a panic-room mentality, where employers huddle and hide behind locked doors and impenetrable applicant tracking systems. It highlights one recruiting perversion after another:

The problem is not that a company called the cops on a job applicant it attracted. That’s merely a symptom. The problem is that the highly automated recruiting system our economy depends on can’t deal with people.

What kinds of contradictory messages have you gotten from employers? What’s the most bizarre experience you’ve had when applying for an advertised job?