Is this resume too long?

In the July 14, 2015 Ask The Headhunter Newsletter, a reader asks an age-old question.

I’ve always abided by the standard advice to have your resume focused at one page. However, due to my eight years of experience, more than a few people (including a headhunter), are saying that a one-page resume doesn’t give enough information. To paraphrase a friend, “Just one page of detail makes me think you’re making crap up.”

What do you think, are one-page resumes for experienced people too short? Thanks for your time.

There’s an old story about a college professor who graded term papers by sailing them down a steep staircase. The ones that made it to the bottom got the highest grades. Weight mattered. (We won’t get into aerodynamics.) 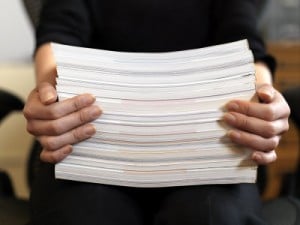 In a story attributed to a man who was chided for having legs that were short, he replied, “Short? They both touch the ground!”

Does length of a resume matter? Should you stick to one page? Is it best to avoid multiple pages because no one will read them or because too much information might put someone off? (See The truth about resumes.)

I could answer with several more stories culled from my headhunter’s collection. Here’s one of my favorites. An engineering candidate I worked with had over 20 years’ experience and an extensive academic history. His resume was 12 pages long, and it was dense. It included details about projects he had worked on, articles he had written and research projects he’d done.

Like you, I’d been taught to keep a resume short and to the point. I was (still am) pretty good at editing and chopping, but try as I might, everything in that resume seemed relevant and important.

I sent this candidate to an interview with a client after presenting him only on the phone (no resume). When the meeting was done the client wanted the resume, to fill in the blanks about the engineer’s history. I sent those 12 pages. The client wanted it all. Every page mattered.

My advice: Edit your resume to make it relevant to the employer, and make it as long as it needs to be. Make sure it’s long enough so it reaches where it’s supposed to go.

For more about my view of resumes, please see Resume Blasphemy and Put a Free Sample in Your Resume. (Most of the latter is now in How Can I Change Careers?) If you’re going to use a resume writer to help you, seek out the best — but I suggest you do it yourself. Avoid the popular resume-mill scams.

Is your resume really long? Or do you stick to one or two pages? What works for you? If you’re a hiring manager, do you care?