In the October 14, 2014 Ask The Headhunter Newsletter, a job seeker won’t make a video:

My wife, a veteran in her field, began a search for a better job and company. In the past, she used the broken and traditional job hunting methods. After showing her the Ask The Headhunter website and purchasing the companion books — and with a little coaching from me — she landed two job interviews with hiring managers within three weeks. 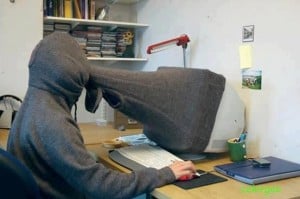 Suddenly, a personnel jockey injected himself into the ongoing discussions with the hiring manager. The recruiter insisted that my wife submit herself to a one-way, online digital video taping, answer a series of pre-selected “screening questions,” and upload it to who knows where for “further review and screening” by who knows whom.

She found the request creepy, impersonal, presumptuous, Orwellian, exploitative, voyeuristic, unprofessional, and perhaps even unethical. (I’ve attached HR’s e-mail.) She declined, instantly prompting an automated “Do Not Reply” rejection e-mail. She was not worthy because she wouldn’t subject herself to a dehumanizing “HireVue Digital Video Interview.”

This new wrinkle in HR practices seems like the most unsettling and counterproductive yet. It not only removes access to the hiring manager, but also live, human interaction. It sounds like “HR pornography,” where perverted personnel jockeys huddle around a monitor to gawk at videos of “virtual job candidates,” picking apart perceived blunders while they screen you out.

Would you please share your comments and advice on this new and bizarre interviewing phenomenon?

This HR department cheapens itself, the employer, and everyone it subjects to automated interviews. “Talk to the camera by yourself” is not an interview. It’s stupid. Your wife is right to say no, and she’s smart to move on to a better employer.

A recent survey of 600 HR professionals by McQuaig Institute, which develops talent assessment tools, found that 65% of respondents said their company’s hiring managers are not very good interviewers. Meanwhile, HR says its job is to train managers to interview. Is it any wonder HR cuts itself and hiring managers out of interviews and farms the task out to a video company?

A 2013 ADP survey found that, “Consistently across the globe, employers have a significantly more positive impression of how they manage their workforce versus what their employees experience in the workplace.” ADP concludes that “as a whole, HR does not have a handle on the asset it is hired to manage.”

In short, HR is doing a lousy job at interviewing, and HR seems to think it knows what it’s doing — while employees disagree. HR has cornered the market on stupid.

“What’s up with your HR department? I’m glad I spent time talking with you about the job and how I could help your company. But I don’t make videos. I’d be glad to come in for an interview with you. If we decide there’s a match, I’ll fill out a form for HR, but I don’t talk to imaginary interviewers on camera. I find that insulting. I leave the rest up to you.”

Of course, use whatever expressions you are comfortable with. But let the manager know you’re interested in further discussion with him, but not in solo videos for HR.

Managers who relinquish control of job interviews to HR likely also let their mothers vet their dates. The culprit here is HR, but the real problem is the hiring manager. Will he stand up and do what good managers do — make his own decisions? (For more about how HR’s missteps can cost you a job, see 7 Mistakes Internal Recruiters Make and The Recruiting Paradox.)

I reviewed the e-mail instructions your wife received — all boilerplate. It’s pitiful and sophomoric:

“One of our Recruiters will review your information and if there is a good match, you’ll be contacted either via e-mail or phone to schedule additional time to speak live.”

But the hiring manager has already decided to spend “additional time speaking live” with your wife. So what’s up with this? How is a “Recruiter” (capital R) going to judge whether there’s a good match better than the manager who has already been interviewing her? Stupid.

“This is a real interview! Be sure to treat this interview as you would an in-person interview.”

Bull dinky, not it’s not! It’s a fake interview with no interviewer.

If anyone fears saying no means “losing an opportunity,” the far bigger risk is having your video rejected by HR — and then having it float around the company forever — if not in some video-interview vendor’s database. (How do you know it won’t be shared with other employers?)

“Feel comfortable to be yourself. We want to see your personality.”

What they mean is, we don’t want you to see the personalities of our personnel jockeys because, face it, they’re a bunch of data diddlers that we don’t want talking to anyone. (I wonder what they’d say if you asked for a video of HR answering your questions? For more stupid HR tricks, see WTF! Inflatable Interviewer Dolls?)

If I were your wife, I’d want to talk with the manager one more time, to find out what he thinks about all this. If he tells her he has no choice, my reply would be, “I’m amazed. I left our discussions very impressed, but I’m going to be blunt with you. I’d never take a job in a company where managers don’t manage the hiring process. It says a lot about the operating philosophy at your company. I wish you the best.”

Is your wife taking a risk by talking to the manager like this? I think there is little, if anything, to lose when you are forced to the back of the line by the HR department and the manager concedes. A professional community that does not call out questionable behavior is not worth living or working in. 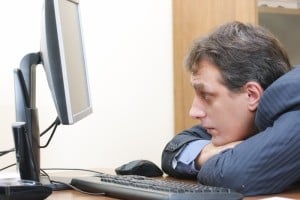 To see the punch line in all this, you have to visit HireVue.com, the company that handles video interviews for this employer. Scroll to the bottom of the homepage, where HireVue offers a “success story” from a leading customer — Rodney Moses, VP of Global Recruitment at Hilton Hotels. But Rodney doesn’t tell his story in a video; it’s a slide show hosted not on HireVue, but on SlideShare.net. Video interviews are good enough for you, but not for HireVue’s best customers. HireVue and HR need to eat their own dog food before feeding it to job seekers.

More important, HireVue reveals the real problem employers face, in the introductory video at the top of its homepage.

HIREVUE AUDIO: “In a sea of candidates that all look the same, how do you find the ones that stand out? Since 2005 the number of applicants for any given job has increased four-fold, making it impossible to properly screen and assess each individual…”

No kidding! And what do you suppose caused that increase?

HireVue’s business model is predicated on employers blindly soliciting staggering numbers of applicants — far too many — via indiscriminate digital advertising. The results overpower any employer’s HR resources, so HR needs a video screening process to deal with a job posting process gone haywire. The real solution is to turn off the firehose and eliminate the flood of inappropriate applicants.

If HR would stop drinking from a firehose, it wouldn’t need to throttle its candidate pipeline. Besides, it’s unbecoming to do either.

A manager talks to a candidate again and again, only to have HR demand that the candidate make a video in front of an unmanned camera so HR can decide whether to continue discussions.

Just say no. But it’s the manager who should be saying no — to HR — about making inappropriate requests of job applicants.

Your wife did the right thing. Is it worth letting top management know what’s going on down in HR’s playroom? If HR is busy playing digital spin-the-bottle, HR should get out of the hiring business.

HIREVUE AUDIO: “Your best candidate could be the 100th to apply, yet you’ve only got time for the first 25.”

Ah, the promise of being able to view a hundred or more candidate videos!