Now THIS is a job description

I still think the best way to find great people to hire is to go where they hang out and talk to them.

ted… Joey deVilla over at Microsoft Canada has a good idea.

Just tell people about your business.

Don’t post a job description. Well, deVilla does provide a copy of the thing — he stuck a link to it near the top of his posting, so you can look at it if you want to. But it doesn’t get in the way of his message. I mean, if the rest of what deVilla says about the job doesn’t get your motor running, why bother looking at the spec sheet from HR?

This ain’t rocket science. Here’s why deVilla scores major points with me. This is a guy talking about a job he loves doing himself. He’s telling you what gets him up in the morning, about his boss, about the cool gear you’d get to work with, about the team’s philosophy, and much more. The sort of stuff you wouldn’t ordinarily find out til you showed up for an interview. 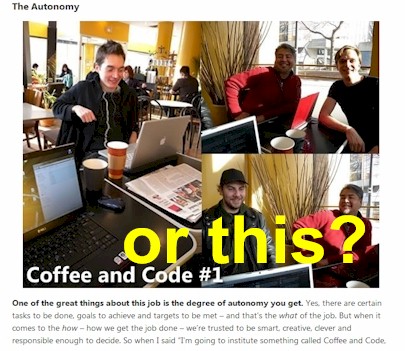 And that’s the point. deVilla is telling you up front what this gig is really like. Yah, he makes it look great — there’s definitely some selling going on here. But lordy, there’s no selling at all going on in that other document. If deVilla’s posting makes it look like working with his team is a party, that HR word pile up above makes it look like life in a straitjacket!

The key thing about what deVilla is doing is that he’s doing the recruiting himself. He’s not waiting for some personnel jockey to post a job or run an ad. deVilla is the guy in the department who does the work, telling the world what the gig is all about and what it’s like to work there.

One last comment about the job description itself, which, as I mentioned earlier, is found via image and link at the top of deVilla’s post: Bleahhhh. Take a look at that thing.

What, Microsoft doesn’t have any web designers doing work for the HR department? I mean, this looks like the drug interaction notice on that medical sheet the pharmacy gives you along with your new prescription. Gimme a break! Why doesn’t it look like deVilla’s posting? Blah blah blah 6-point type?? I barely got through the first two sentences. Does anybody believe anybody else reads this stuff? Come on — tell the lawyers and the compliance people to go home. A typeface and a layout like that tell you one thing: There’s something snarky and legal hidden in here and if you find it you’ll never apply. So, let deVilla write and format that thing so it says something.

Yo! Does this make sense to anybody? HR should get out of the recruiting business. (See Why HR? and REJECT! How HR engineered its own funeral.) Let the people who own the job tell the story. In fact, don’t let anybody else do it.

Recruiting. It’s the manager’s #1 job. And if managers aren’t doing it, they’re not doing their job. Kudos to deVilla and to his boss, and to Microsoft Canada.

My only advice to deVilla: Add an e-mail link, so interested applicants can talk to you directly. Don’t leave them with that dopey application form, because having inspired the best of them, you’re going to lose them if they can’t get in touch with you now. Please re-read the first line of this post. Now that you’re getting them to come hang out where you live, Open the door and talk to them.