Hiring great people is a noble goal but it raises two challenges: how to attract candidates with those rare, valuable qualities into your pipeline, and how to identify them in the interviewing process when everyone is telling you how talented, motivated, curious, and ethical they are (yada, yada, yada). Desperate recruiting doesn’t work! How do we get past all that so we really know who we’re hiring? How do we avoid hiring in desperation? 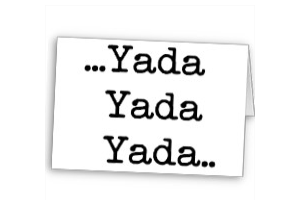 Let’s talk about two fatal flaws in the entire recruiting and hiring process. First, we try to attract people when we need them. That limits us to rushed “just in time” recruiting methods that don’t work well. That’s desperate recruiting.

Second, these methods elicit rote responses from candidates who apply for jobs almost indiscriminately. We’ve all seen it — candidates with the “I’m your (wo)man” smile on their faces.

As you note, that’s the “Yada, yada, yada” interview. You can spend the entire time talking interview in your office when you could be talking shop in the real world.

Find and enter their pipelines

To find the few right candidates (rather than search through the entire universe of candidates), we can try to “attract people into our pipeline” all day long. But the ones we want are living in their own pipelines, or professional communities.

Here’s the problem. You can’t assess someone in a job interview. You need to see them in action. That takes time  because we must go to them.

Recruit people you have already gotten to know that know you. That takes time and there is no shortcut to that kind of quality.

The people we want are all around us on discussion threads on work-related forums all over the Internet, talking shop. They’re at conferences and in education programs. Talk shop with them, get to know them, establish your own cred and you’ll always have someone to turn to when you need to hire.

People make career changes only at certain points. We must meet them on their career tracks, and be present at the critical points in their work lives. We can be there to talk to the best because they already know us, or we can be out chasing people who are chasing jobs.

The Zen of it is this: You can’t really identify the people you want in the interview process. At that point, it’s too late, and it’s all too scripted. That’s desperate recruiting.

Every year, the world spends billions for “just in time hiring” through online job boards, but precious little on circulating among the narrow, relevant communities these folks live in. How silly.

If your pipeline is full of applicants and resumes, that’s desperate recruiting. The best you can do is Yada, yada, yada through 20 interviews pretending you’re getting to know someone. You can’t assess someone in a job interview. It can’t be done. You have to mix it up with them in their own real world. Really getting to know who’s the best takes time. If you want to hire them, you have to start last year.

How does your company hire? Do you “Yada, yada, yada” through your interviews? Or do you cultivate relationships? Tell me why it takes too long to do it my way…