In the November 1, 2016 Ask The Headhunter Newsletter, a reader tries to do the right thing by giving two weeks’ notice and loses two weeks’ pay. 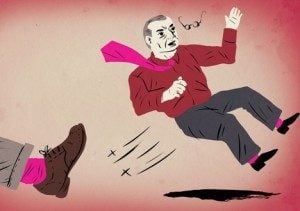 I have a new job, so I gave my two weeks’ notice to my employer. But my boss let me go the same day! He said, “I accept your resignation. And you’re gone immediately.”

I needed at least another week of work because I can’t afford two weeks off between jobs. Now I’m screwed. They gave me three hours that day and told me to leave. I’ve always given at least two weeks’ notice to be fair to my employer. Is it right that they did this to me after I did the right thing for them?

Unfortunately, it’s not a question of right. For the employer, it’s a judgment call.

Here’s what your boss may be thinking:

You never know how an employer is going to react. For some tips from my PDF book, Parting Company: How to leave your job, check this article: Protect Your Job – Don’t give notice when accepting a new job.

I think an employer is a dope to not take advantage of two weeks’ notice to help transition your work to another employee. But once you resign, your employer is not obligated to keep you on. There may even be a company policy about not letting employees who resign stick around.

While it’s a good thing to do right by your employer, this is why I tell people to consider their own interests first when quitting a job. If you think it’s risky, don’t give notice. This is just one issue when leaving a job. In the aforementioned book, I cover loads of other issues people never think about, including:

Two weeks’ notice used to be a standard courtesy. Although some employers still expect it, in some places it’s a risk to offer it. People like you try to act ethically and with integrity, but leaving a job is a business and financial decision that nowadays is handled coldly by many companies. While I don’t advocate quitting without notice, I suggest that people get their ducks all in a row before they walk in to resign a job. Plan for the worst.

This article may be helpful as you consider any new job offer: Protect yourself from exploding job offers.

Sorry to hear you got hurt in the process. But congratulations on landing a new job!

Have you ever gotten burned for giving two weeks’ notice when quitting a job? If you’re a manager, would you walk an employee who quits out the door, or do you want the notice period?

When should I tell my boss I’m resigning?

In the January 15, 2013 Ask The Headhunter Newsletter, a job hunter asks when to give the boss notice of resignation:

I have an opportunity to move from a large corporation to a established startup. I have put in seven happy years at the corporation, but the new position will be a nice change. I’m still going through the interview process, and it’s going well. When do I break the news to my current boss? I don’t want to burn any bridges, and I don’t think I would accept any counter-offer. I just want to give respectable notice so that he can replace me.

Congratulations on the new opportunity, but please — don’t jump the gun. Never, ever give notice or resign until:

It doesn’t happen often, but job offers get rescinded, especially between the informal oral offer and the bona fide written version. Don’t be left on the street without a job. When the above milestones have passed, I’d tell your employer nothing except that you’re leaving. Give your boss a one sentence resignation letter that says nothing more than:

“I hereby resign my position effective on [date].”

The details of your “notice” don’t need to be spelled out in the letter. In person, I’d commit to helping with a proper transition not to last more than two weeks, unless you really want to be helpful — that’s up to you.

There’s a small chance that, no matter how well you and your boss get along, you will be ushered out the door immediately. Some companies have very strict security policies, so make sure all other loose ends are tied up before you resign. They may not even let you go back to your desk. This is unusual, but it does happen. Even friendly employers can turn officious when a person resigns. Just be ready for it.

I would not disclose where you’re going. I’ve seen bitter former employers try to nuke a person’s new job. Politely explain you’ll be in touch right after you start the new job, if your boss really cares. I’m sorry to focus on the worst case, but you don’t want to get torpedoed before you start your new job. The odds of something bad happening are probably small, but the consequences can be enormous. My advice is, don’t chance it.

Again, congratulations. Take it one step at a time until the new deal is solid and safe. I wish you the best.

Have you ever resigned, only to have your new job offer rescinded? Has a resignation ever gone awry? What’s your policy about the nuts and bolts of transition when leaving a job?