Readers’ Forum: Is this company worth working for?

Every January, pundits publish their predictions for the new year. I don’t make predictions because I prefer not to be judged when I’m wrong ;-)

But it’s not hard to surmise that if the economy improves this year, the employment shoe will be on the other foot. The personnel jockey who has routinely been spitting rude questions at job applicants and challenging them to accept 20% lower salaries will likely wind up swallowing bile in 2010. Time to get out the kleenex and wipe up the drippings. 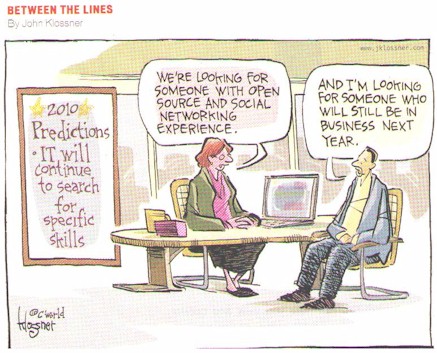 My favorite IT (information technology) publication is ComputerWorld. The first 2010 edition includes a cartoon from the very pointed pen of John Klossner that every smart employer should take a look at. (And if you’re a job hunter, take note: Employers can whip you only so hard in job interviews before you instinctively tell them to shove it.)

There are two messages in this cartoon. First, challenge employers to assess whether they are qualified to hire you. Maybe the company isn’t a good place to work. Second, Pursue Companies, Not Jobs.

While the demoralized guy in the applicant’s chair says he’s “looking for someone,” he’s really looking for a company.

And that’s the point. You may need a job and a paycheck, but you also need a future that doesn’t require going job hunting again in a few short months. While you’re sitting across the table from that interviewer, figure out, Does this company suck?

Yah, there are other ways to say what the guy in the cartoon is saying. What are they? How do you politely but clearly challenge the employer to make sure it’s a company worth working for?

[Computerworld does not seem to publish the cartoons from its magazine in its online edition, or I’d link directly. Credit where it’s due: Computerworld, January 4, 2010.]