Networking For Introverts: How to say it

In the September 13, 2016 Ask The Headhunter Newsletter, a shy reader frets about networking but is ready to mix it up with new people. 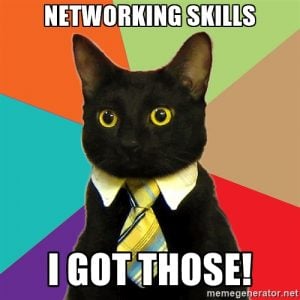 I like your advice about networking by hanging out where the people I want to work with hang out. That’s very different from contacting people I don’t know on LinkedIn, which seems creepy and dishonest. But as an introvert I have a hard time breaking the ice even when I’m hanging out with people at a conference, or in a training class or even at a social event. This is for me to get over, but do you have any suggestions?

Write it down. And be honest.

When I started headhunting, I was fresh out of grad school. I had zero business experience and zero technology experience. But I was recruiting electronics engineers. I had to call people I didn’t know on the phone, introduce myself, and try to recruit them. It wasn’t dishonest, because I had jobs to fill, but talk about creepy!

Worse, I was an introvert. I was shy. I hated starting conversations because I never knew what to say. What if someone hung up?

Networking? Write it down.

My boss gave me a short script to use when I made those calls. I was embarrassed to recite it, but I realized I had to start somewhere. She told me not to worry if I “lost” someone that I called.

I read that script to people a few times until I realized it would be less creepy if I tweaked it a bit. So I did. Then I tweaked it some more. After a few more calls, I had re-written the thing so I sounded like me. Still, it was reassuring to read it rather than have to think about what to say.

Suddenly I was able to talk to engineers. In behavioral psychology we call that successive approximation of a desired behavior. Little by little, if you approximately perform the behavior of breaking the ice, you feel like you’ve accomplished something — and you get successively better at it. Pretty soon you’re actually doing it.

Oh, they’d laugh — and then give me a short lesson in whatever I was asking about. They kidded me that I was the only headhunter who didn’t spout buzz words ignorantly. “You really want to know what we do!”

And that’s the other key: You must be honestly interested in other people and the work they do. If you’re not, don’t even try this. Find another area of work that does honestly interest you, and go talk to people about that.

Engineers took me under their wing. Pretty soon I was placing enough of them at better jobs that word got around I was the guy to talk to.

I know it’s corny, but I suggest you work up a script you feel okay about. Write it down. Try it out “live.” Pay attention to how people react when you try to break the ice. Tweak it til it feels good.

I suggest starting like this. Walk up to someone and say:

Let them talk, then ask:

“What would you say is your company’s biggest competitive advantage?”

“How does your company make the most of your [engineering] skills?”

Perhaps it seems corny. It’s not. It’s honest. You’re admitting you don’t know something you’re really interested in, and you’re asking. While someone might be rude and turn away, most people are sensitive to inquiring minds — as long as it’s not a personal topic. Work is open game.

Let them talk. They’ll ask you some questions. Just answer naturally. Ask more questions about their work. I like this one:

“What have you read or learned recently that has influenced how you do your job?”

All you’re doing is making conversation and getting to know someone. What makes it easy is that you’re letting them do the talking about something almost everyone likes to talk about: themselves.

I let go of my shyness when I realized I was fine asking people about their work, and talking about my work — so I stuck to that. Then I became more outgoing because I was no longer afraid of how people would respond to me.

We’re all different. I’m not suggesting my exact Hot to Say It tips will work for you. You must tweak them to suit who you are and how you talk. My boss said to me, “Stop resisting the script and just use it a few times until you come up with something better!”

Write it down to start. Tweak it — but keep at it. Just remind yourself: If something feels creepy, don’t say it or do it. (See Please! Stop Networking!) Be honest. Talk shop, be yourself, let other people do the talking at first. Pretty soon they’ll be laughing at the honesty of your questions and they’ll tell you what you need to know.

Once that happens, they’ll introduce you to their friends. If you’re looking for a new job, that’s where the fun starts!

If you need more help understanding how to connect with people comfortably, see the chapter “A Good Network Is A Circle of Friends” in How Can I Change Careers? (This PDF book isn’t just for career changers — it’s for anyone who wants to stand out to employers.)

Okay — what magic words do you use to break the ice? Even outgoing folks can get nervous introducing themselves to others. Are you shy and introverted? How do you do it?