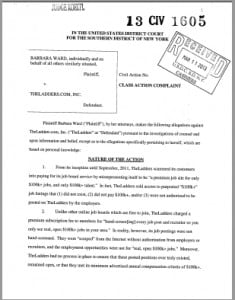 Ask The Headhunter readers have been asking for it for years, and it’s finally happened. A consumer protection class action was filed against TheLadders on March 11, 2013 in U.S. District Court, Southern District of New York, for:

The suit alleges that:

Click here for a complete court-stamped copy of the class action complaint.

“Unlike other online job boards which are free to join, TheLadders charged a premium subscription fee to members for ‘hand-screen[ing] every job post and recruiter so you only see real, open $100k+ jobs in your area.’ In reality, however, its job postings were not hand-screened. They were ‘scraped’ from the Internet without authorization from employers or recruiters, and the employment opportunities were not for ‘real, open $100k+ jobs.’ Moreover, TheLadders had no process in place to ensure that these posted positions ever truly existed, remained open, or that they met its minimum advertised salary criteria of $100k+.”

If you believe you were scammed by TheLadders, you can obtain more information from Bursor & Fisher, the law firm that filed the complaint.

I’m laffing my ass off.

Not just because I’m happy TheLadders is finally getting exposed for its stupidly arrogant empty promises. But because it took so long for an attorney to read TheLadders advertising:

In 2010, a very unhappy CFO who had spent loads of money on TheLadders — and even more of his valuable time — ran the numbers and reported that the numbers just didn’t add up. There was no way that TheLadders could deliver the number of “$100K+ jobs” that it promised: TheLadders: A long-shot Powerball lottery tucked inside a well-oiled PR machine.

TheLadders has been lying for years. Evidence from TheLadders’ own customers — reported here and elsewhere — has revealed again and again that TheLadders’ database never had “only” $100K anything in it. TheLadders own representatives were admitting it to angry customers in customer service chats — that at least one customer had the good sense to save. 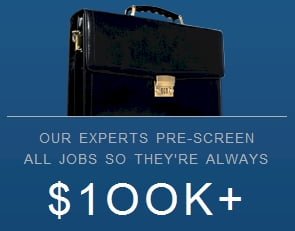 When it seemed job hunters doubted the database, TheLadders’ chieftain, Marc Cenedella, came up with a claim even stupider than that: TheLadders had experts checking over very single job to make sure they’re always $100K+.

Yah, right. Not long afterwards, after repeated reports that TheLadders was still lying, Cenedella dumped the $100K lie altogether. The salary checkers are gone (Oh, I’m laffing my noogies off, Marc!) and any salary goes!

But the lawyers at Bursor & Fisher saved all the advertising graphics and the lies and stuck them into a class action complaint. Funny how stuff like that follows a company around — and drags it into court.

I expect Marc Cenedella is gagging on that jpg right about now. There’s more where that came from, Marc. Read the complaint — and don’t miss all the nice graphics you paid for over the years. The filing is loaded with them.

TheLadders is not a new subject on this blog. We’ve covered the company’s questionable behaviors many times. No one should be surprised that Marc Cenedella’s company is being sued. Here’s a selection of posts:

TheLadders: How the scam works

The dope on TheLadders

Got a Ladders story of your own? Tell it, tell it — now maybe something will come of it! Did you save some documentation that no one would pay attention to before? Share it, share it! Now somebody’s listening.