The labor shortage is really a pay shortage 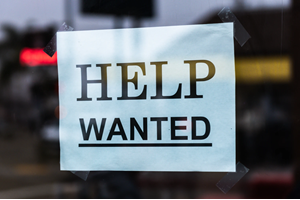 I bookmarked an article you wrote a few years ago: B.S. on the jobs numbers euphoria. Jobs numbers are the #1 story again: 260,000 jobs added versus over a million the economists predicted would be a slam-dunk! Is that a labor shortage or job shortage? Maybe a pay shortage? Once again they’re blaming us, people looking for jobs! We’re not educated enough or skilled enough or willing to go on goose-chase interviews recruiters e-mail us about. Now we’re deadbeats living on rich unemployment supplements. Who needs to work, right? I DO!

The burning question in the news today is, why are so many employers unable to fill jobs? Is it because, as some claim, recipients of pandemic relief benefits would rather “collect” than work? Is it because people who want to work are afraid to, because the virus is still a risk? Or, as others say, are working women staying home because someone has to watch the kids while schools are closed?

I’m no economist — hell, they just got the “jobs added” numbers wrong by about a factor of 4! — but based on what my readers tell me and on what I see, the answer is simple. Employers don’t want to pay market wages and salaries to attract workers for jobs they say are so important to fill.

I believe low pay most readily explains much of the inability to hire. There’s no labor shortage. It’s a supply and demand problem. And many employers are running scared because they don’t know what they’re doing. (A more cynical view is that they’re just greedy.)

Let’s look at the contradictions.

On one hand, unemployment has remained at around 6.1% — still very high. According to Neel Kashkari, President of the Federal Reserve Bank of Minneapolis, between 8 and 10 million people who want to work can’t find jobs. He also suggests it’s unreasonable to expect the effects of the pandemic are over. He says things are getting better, but it’s going to be months before we see substantial improvements. Judging from the numbers, we don’t need an economist to tell us the problem is a shortage of jobs — jobs that pay enough to attract workers.

The U.S. Chamber of Commerce, on another hand, suggests those 8 to 10 million are deadbeats living large on pandemic relief benefits. In fact, the Chamber is so sure it can find jobs for all those people that it has demanded the extra $300 per week unemployment benefits be cut immediately. Says the Chamber: “It’s giving some recipients less incentive to look for work.”

Now we need a third hand to juggle the facts. On May 6 Barrons proclaimed, Get Ready for a Blockbuster Jobs Report of 1 Million or More. Oops! The next day, the Bureau of Labor Statistics revealed that business added just 266,000 jobs last month — not over a million like economists confidently predicted. So, where are “all those jobs” employers can’t fill and that you should be applying for?

It seems pretty simple: The real disincentive to look for work is that there aren’t enough jobs since the pandemic started! Employers who are trying to get back up and running think they can keep pay low because millions are “looking” — but job seekers aren’t buying low wages. They’re not stupid.

I’m sure some jobs are going begging, but lots of unemployed workers are refusing to beg. Let’s look at some examples.

“Mike Jurusz is worried about the summer. As owner and executive chef at Chef Mike’s Atlantic Bar & Grill in South Seaside Park, [a New Jersey beach town] he said he can’t find anyone to hire. He blames his staffing troubles on expanded unemployment benefits and stimulus payments. ‘It’s impossible to get help right now,’ he says.”

Here’s where facts run into overwrought explanations — and perhaps into poor business decisions. (By the way, I don’t pick on Jurusz or anyone else except that they’re a handy examples provided by the press. I don’t know him or his business other than what I’ve read.)

Jurusz doesn’t reveal what he’s paying to fill those jobs. Yet he complains that “businesses that raise their hourly wage to entice workers make it harder for others to compete.”

“‘We are going to have to be forced to pay people who are not worth what they should be getting,’ Jurusz said. ‘That will increase my labor costs, then we have to increase the pricing because we have to stay in business. You’re going to see $30 plain pizzas and $35 subs.”

What I hear is a small businessman running scared. I feel for anyone facing business challenges, but having to make payroll is going to put some businesses out of business. Welcome to the new economy.

They do if you listen to retailers, who say that to compete with Amazon, which pays more than $15 an hour to snatch up available labor, they, too, have to raise wages. While some restaurateurs can’t beat that kind of job offer, Amit Patel, a snack-food manufacturer, also in New Jersey, said to the Star-Ledger:

“Do you think an employee would want to work at $10 or $11 an hour in a COVID environment when they have no job security, no benefits? People are realizing their worth is a lot more.”

Patel has raised the wages his company pays by 30% since the start of the pandemic.

Another New Jersey restaurant owner in the same Star-Ledger article, Tim McLoone, said he doesn’t blame the hiring challenges on people who don’t want to work.

“It’s offensive to demonize one group of people,” he said. “There’s no question that unemployment has contributed to the diminishment of the labor market, but it’s not like they’re staying home to watch The Price Is Right and they don’t want to work.”

McLoone recently increased hourly wages to $15 for employees who don’t receive tips. Got a labor shortage? Grow up and pay what you have to. It’s called a market.

The economists who got it wrong are trying to scapegoat working stiffs who know from experience that employers aren’t adding jobs at the rates economists claim. All those job postings on Indeed and LinkedIn include a lot of dupes and garbage. They know many employers aren’t offering wages worth working for — just ask them what the recruiters are pitching. Anyone that planned on over a million new jobs got suckered by wishful economic predictions.

Blaming the pandemic relief program is a cheap shot designed to deflect responsibility from employers large and small that have been profiting enormously for a decade without sharing with their employees. You can look up the average disparities between executive pay and employees somewhere else. I’m frankly sick of looking at the numbers. If anything, the relief benefits are balancing the scales a bit.

But there’s another part to this. Some of those unemployed workers have wised up to the game. They’ve gotten smarter than employers and economists. They know they’re worth more and won’t work for less.

In other words, it seems employers that respect the law of supply and demand offer higher wages — and they can afford to. Just look at Amazon. If your business model doesn’t permit you to pay enough to attract good workers in a highly competitive market, maybe that says you can’t compete. Maybe you shouldn’t be in business. It’s a new labor market.

The “jobs numbers” suggest that many of the millions of unemployed who want to work are wise to wait until healthy businesses offer them higher pay. The pandemic benefits make it a bit easier to hold out, but it’s the choice I’d make even without the benefits.

I’m not an economist or a labor market expert. But it’s not hard to see what’s going on. I can interpret what I see pretty easily by looking where the big money is telling me not to look — past the noise.

For example, the U.S. Chamber of Commerce says:

“Based on the Chamber’s analysis, the $300 benefit results in approximately one in four recipients taking home more in unemployment than they earned working.”

The Chamber is bragging that its members pay less than unemployment does? If employers really believe Uncle Sam is out-bidding them and keeping labor on the sidelines, those employers are simply uncompetitive.

“Some businesses have been complaining to the White House and lawmakers that they are having a hard time recruiting workers, particularly for low-wage, hourly jobs.”

But are these businesses offering more competitive wages?

“Average hourly wages rose about 21 cents across the country, data that the BLS suggested reflected increasing demand for labor.”

21 cents? Not only are these clowns not competing with Amazon and Tim McLoone, they aren’t even anteing up to stay in the game. The Star-Ledger reports that Morey’s Piers, operator of amusement parks in New Jersey, has boosted pay 25% to $15 an hour to fill 1,500 seasonal jobs this summer. There are those that get it and those that don’t.

This isn’t complicated, unless you listen to economists and greedy employers. Yes, greedy employers. I’m not even going to offer you links to articles about massive profits, stock prices and executive pay that has dwarfed employee pay in the past several years. I’ll just point out that the business world’s alpha dog, Jeff Bezos, has allowed that he understands and supports tax hikes on corporations and the very wealthy — and Amazon has boosted employee pay. The jig is up. It’s time for business to pay up.

I’ll leave you with two brief audio segments from a Bloomberg Radio interview with Fed President Neel Kashkari. (I’ve added emphasis.) This guy gets it and he’s not afraid to say it.

“I hope we see employers step up. That was one of the things that was extraordinary about the last recovery. It took 10 years to return to something like maximum employment, and I’m not even sure that we quite got there before the pandemic hit. And it was only in the last few years of the recovery, after many years of businesses complaining that they couldn’t find workers, only in the last couple of years that we finally saw wages start to pick up, especially for those lowest income workers. Businesses will do anything they can do to try to meet their labor needs — and the last thing they want to do is raise wages.”

“We have the tools to tighten monetary policy to keep inflation in check. I’m not worried about that. What I am worried about is not having another 10-year recovery for our labor market. That’s devastating to millions of Americans and we need to put them back to work much more quickly.”

Yah, I know it’s more complicated, but this Fed president has the candor to break it down so it’s simple. It’s time for politicians, employers and government to grow up. The sooner the economy faces it, the better. To get businesses back up and running post-COVID, companies have to pay more. Not because of COVID. Because it’s long overdue. The virus has just served to remind people that life is short — and they’re not willing to work for less.

What do you see when you step back from the “labor shortage?” What’s the fix? Have you stayed out of the job market because employers are low-balling you? Have you found competitive employers who pay well? How can an unemployed job seeker find a good-paying job today?