In the February 14, 2017 Ask The Headhunter Newsletter, a reader discovers topgrading and the A, B, Cs of hiring.

As an employer and interviewer I’ve been reading about topgrading and would appreciate your thoughts and expertise on this topic. 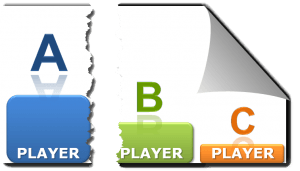 I don’t have to drink cynicism to know it’ll poison me. And I think topgrading is as cynical a way to assess job applicants as any job-interview tool you’ll encounter.

Topgrading was invented as a selection technique by Brad Smart at General Electric, during the tenure of “Neutron Jack” Welch, the CEO who invented stacked ranking of GE employees. It’s hard to tell which idea was the parent and which the evil spawn.

Also known as “rank and yank” and “forced ranking,” stacked ranking  was how Welch routinely got rid of 10% of his workforce. Managers were forced to rank all employees and to fire the bottom 10% — supposedly the weakest ones. As you can imagine, a team of top workers runs paranoid when everyone knows 10% will be cut regardless of how productive they are.

In other quarters, the practice is known as an HR Witch Hunt.

Topgrading is really nothing more than stacked ranking applied before hiring.

I’ve never performed a topgrading interview because I want to go to heaven. And I don’t have clients that use it because I wouldn’t subject my job candidates to it. If you want to find a topgrading expert, you’re on your own.

It’s worth understanding what topgrading is, especially if you’re going to be subjected to it when you’re applying for a job.

Like stacked ranking, it assumes that there are three kinds of workers. A people, who are worth keeping or hiring. B people, who aren’t. And C people, who have a kind of corporate leprosy or pellagra and will infect your A people if you let them in the door. (Don’t worry, there’s a way to keep them out — we’ll get to it.)

If you view the world as A, B and C people, you have no business in business. You’re a cynic who likes everything neatly labeled, and who likes things that don’t change.

The other big idea in topgrading is that you can figure out who’s an A, a B, and a C. Of course — here it comes — you can pay Topgrading, Inc. to learn how to separate the As from the Bs and Cs. The company claims its sorting method yields 75% A hires.

If you believe that, you probably have a stockbroker whose stock picking method delivers 75% winning investments. Which means you lost all your money to Bernie Madoff.

Ranking people to identify who will and won’t succeed isn’t so much a mistaken idea as it is a bad attitude.

Topgrading is based on a cynical premise — that candidates lie in job interviews. That’s a hoot coming from the guys who invented it — interviewers from GE who fooled loads of companies into using stacked ranking.

I’m not a fan of tricky interview methods. It would be interesting to see a corresponding methodology that attempts to identify employers who lie in interviews, and when they’re recruiting.

It sounds like a panacea for managers who believe most job applicants — non-A people — are liars that need to be scared away. Perhaps an effective sorting technique for companies is to look at which managers want to use topgrading, and fire them to get rid of the cynics.

There’s just one big idea in topgrading: a technique used to expose all the liars who apply for a job.

Topgrading, Inc. calls this big idea “Threat of Reference Check” or TORC. It’s simple. You threaten all job applicants with reference checks before you even let them in the door. Here’s how they explain it:

“Because candidates know they will arrange reference calls, they tell the whole truth. And finally, you verify everything by talking with bosses (and others YOU choose); there is no phone tag because candidates arrange those calls.”

Get it? This threat “scares away low performers.”

An HR exec unloads on topgrading

Mike Smith is an HR executive in the San Francisco Bay Area who produces a blog called Back West. He rips the heart out of topgrading in Talent Wars: The “A” Player Hoax.

“The prevarication that success comes to companies that systematically hire and develop only ‘A’ players is twofold:

Smith offers this caution to gullible employers: “Performance, both with individuals and organizations, just doesn’t work that way.”

I think the best evidence that topgrading is crap lies in the highly publicized crash of Neutron Jack’s stacked ranking.

In 2014 The Wall Street Journal declared, “It’s Official: Force Ranking Is Dead.” The HR blog, Namely, tells how GE settled a $500 million lawsuit alleging forced ranking was biased against women. Yahoo! got sued over a claim that forced ranking was rigged — against men. In 2015, The Atlantic ran story about How Millennials Forced GE to Scrap Performance Reviews.

It turns out you can’t invest your money using a special method that ensures 75% of the time you’re going to win. And you can’t ensure 75% of your hires will be A people because, well, there’s no such thing as A, B and C people — or a way to separate them into bins.

Topgrading ranks right up there with Jack Welch’s two-dimensional vision of how to manage people — “rank and yank.”

There are far better, more direct ways to assess job candidates. For example, invite them into live, working meetings of your team, and watch how they behave and perform. (See Big Data, Big Problems for Job Seekers?)

The prevalence of indirect job candidate assessment methods like stacked ranking and topgrading has led management in America off a cliff. Perhaps it’s because managers expect just-in-time, perfect hires. They have no idea how to develop and invest in their employees. If they did, they’d know how to find them and interview them, too. (See HR Technology: Terrorizing the candidates.) If managers were looking for talent, they wouldn’t be using techniques that focus on finding liars.

If you’re a job seeker, and a company tells you it does uses topgrading interviews, I think that should tip you off to find out whether management also practices stacked ranking — openly or surreptitiously. If it does, my advice is, Run. It’s not healthy to work for cynics. Find an employer that respects you. (See Smart Hiring: A manager who respects applicants, Part 1.)

Have you been topgraded, sliced, diced and cut from the list? Ever been stack ranked, yanked and jerked around? Ever interview with a company that assumes you’re a liar? If you think tograding is a great idea, tell us the A, B, Cs of how it works for you.