You’re an employer. You pay LinkedIn to search its profiles when you’re recruiting. Do you care that the job applicants who rise to the top of your search results paid for their positioning? 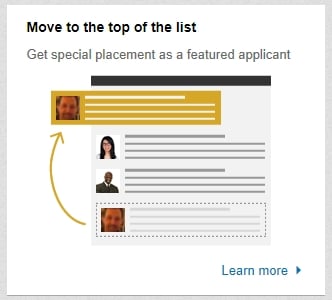 In a sweeping 1950s music industry scandal, radio deejays were exposed for taking money — payola — from record promoters to play their record labels’ songs, regardless of popular tastes. Certain songs went up the charts because record labels paid for positioning.

Today, payola seems to be the name of the game on LinkedIn, where job hunters can pay $29.95 per month to “move to the top of the applicant list” when employers search LinkedIn profiles for recruiting.

In the July 23, 2013 Ask The Headhunter Newsletter, a reader says LinkedIn is behaving immorally and unethically:

I received an e-mail from LinkedIn, with a vertical list of five or six firms and logos, suggesting that I could be interested in these jobs. One of them caught my attention and I applied. I simply clicked on the “View job” link, uploaded a copy of my resume, and clicked the submit button. Immediately, a very questionable pop-up appeared. For $29.95 per month, LinkedIn has offered to sell me an “upgrade” that will put me at the top of the results this employer will see when it searches the LinkedIn database for job applicants. I find this to be unethical and immoral. How about you?

When Ask The Headhunter subscriber Richard Tomkins brought this to my attention (he graciously gave me permission to print his name), I had to see it for myself. 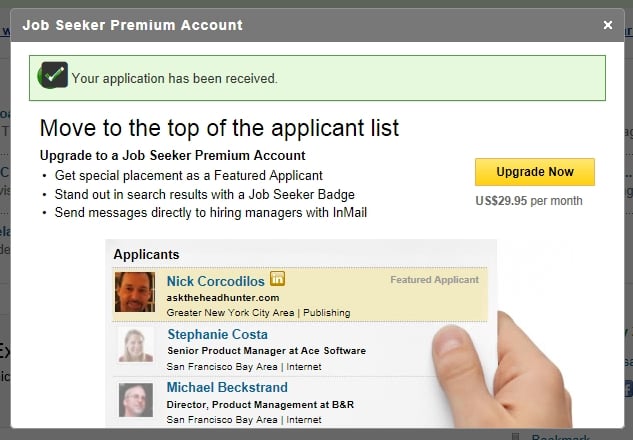 So yesterday I applied for a job listed in a LinkedIn e-mail about “Jobs you may be interested in.” The pop-up that appeared on my screen is on the right.

(Tomkins got the exact same pop-up six months ago, listing the same #2 and #3 profiles beneath his own. He notes they are in the “San Francisco Bay Area,” thousands of miles from his own location. You’d think LinkedIn would gin up a pitch that at least delivers “results” that include “candidates” from the same geographic area!)

I couldn’t believe that LinkedIn was going to sucker an employer — who paid to search LinkedIn profiles — by putting me at the top of the search results just because I paid for it.

“Move your job application to the top of the recruiter’s list!” in exchange for payola of $29.95, LinkedIn said to me.

While the employer is paying thousands to LinkedIn to search for applicants???

So I contacted LinkedIn, thinking that Tomkins and I had somehow gotten this wrong. Could LinkedIn be taking money from job seekers and fleecing employers with fake rankings?

A customer service representative, LaToya (no last name given), explained that the advantage, if I pay the $29.95, “is that your [sic] at the top of the list rather than listed toward the bottom as a Basic applicant.”

So it’s true. LinkedIn sells positioning to job hunters while it sells database searches to employers. Talk about getting paid on both ends of a deal! Meanwhile, the “Basic” applicants (those other suckers, who ride free) are relegated to the bottom of the list.

I wrote back to LaToya: “Don’t the employers get upset when they see someone ‘paid’ to get bumped to the top?”

That was taken care of, explained LaToya: Employers “have the option to turn on and off the setting.”

So I buy top positioning in recruiting results for $29.95 per month, and the employer has the option to render my payment a total waste. The only winner is LinkedIn — higher revenues, higher stock price, higher corporate valuation, and more suckers paying. This is the leading website for recruiting and job hunting?

But it seems there’s another loser in this game: LinkedIn, whose reputation just sank to the bottom of the job board swill pot. (Well, not the very bottom. That’s the sole purview of TheLadders.)

LinkedIn recently awarded Tomkins a “blue ribbon” because his LinkedIn page is “in the top 10% of the most viewed entries.”

But he is not happy:

“If I am in the top 10%, it’s not translating into more interviews, let alone a job. 20 million people got this award? That’s the size of big city or a small country. Should I laugh or cry? What significance does this really have to me? I was okay with their business model, up to the point when they became a job board. If your name is at the top of the list only because you paid for it, that puts you in the same league as Lance Armstrong.”

Tomkins guesses at how the professional network’s business model is likely to evolve next:

“What if three different applicants — all with premium accounts — apply for the same job? Who gets to be on top? Maybe they have another pop-up stacked up, one that offers the user a premium-plus-plus, extra-premium account for $300.”

Is a sucker endorsed every minute?

LinkedIn has turned the business of new product development into Project: Anything Goes.

LinkedIn used to be a credible business network that became the business network online — and potentially the standard-bearer for professional identity integrity. Since it started selling recruiting and “job seeker” services, it has slid down the slippery slope of inconsistent, slimy “offers” and business practices. A generous explanation is that one hand (LinkedIn marketing?) doesn’t know what the other (LinkedIn product management?) is doing.

(This is not LinkedIn’s first dumb move, or its last. Fast on the heels of LinkedIn’s New Button: Instantly dumber job hunting & hiring came the more ridiculous and gratuitous “endorsements,” which serve no purpose but to drive up traffic stats.)

But the question is, why are employers (who pay to access the database) and job seekers (who pay for database positioning) going along while LinkedIn sells them both out with this game of payola?

And where does it leave LinkedIn users who just want to meet one another to do business?

“Sheesh. I’m still pissed off,” says Tomkins. “I used to think of Linked In as a respectable website, but I have less respect for them now than Facebook.”

Have you paid LinkedIn for search-results position and “premium” standing? Does it pay off? If you’re an employer, how do you feel about paying to view search results that job applicants bought? Is this immoral, unethical, or the new standard of business?