Posts Tagged As You Sow 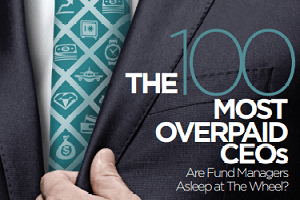 Here’s an inside look at how investors judge companies on how they pay their people — in particular, their CEOs and, for our purposes, how CEO pay compares to the median pay of all a company’s employees.

The 100 Most Overpaid CEOs:
Are fund managers asleep at the wheel?

In March 2019  As You Sow, a shareholder advocacy group, revealed some dirty little (HUGE) salary secrets that job candidates can use.

As You Sow monitors, among other things, CEO pay and evaluates its impact on investors. It turns out big institutional investors really do give a rat’s patootie about how much CEOs are paid — because it seems to correlate with a company’s performance and success.

Thanks to the 2010 Dodd-Frank financial reform bill, shareholders gained access to new information this year. Companies must now disclose the ratio of pay between the CEO and the company’s median employee, shining a brighter light on how high CEO pay has become. This new information can also be used in other ways.

Digest as much of this report as you can, and let’s discuss what it means to you as you pick your next employer.

Will a company give you a fair salary shake? Skip to the appendices in the report (pp. 19-25).

As You Sow reports that:

Sheesh! Gotta wonder how the HR departments at these companies explain to job candidates how CEO pay reflects company performance. Do the candidates know to ask?

When shareholders were evaluating compensation packages in spring 2018, they had a new piece of information: the ratio of the pay of the CEO to the pay of the corporation’s median worker… The average of these CEO pay to median worker pay ratios as of Sep. 5, 2018 was approximately 273:1.

Remember: The benchmark average ratio is 273:1.

Sheesh! Gotta wonder how the HR departments at these companies explain such dirty little (HUGE) salary secrets to incoming job candidates. Do the candidates know to ask?

As Bloomberg columnist Nir Kaissar noted in a recent editorial, “As the grim pay disclosures pile up year after year, the backlash against the corporate elite will intensify. If corporate boards can’t find a better balance in their pay structure, outside forces will, and at a potentially far greater cost to companies and their shareholders.”

Opposition to high CEO pay has risen, and more companies have seen their CEO pay packages receive less and less support from their shareholders.

But what about the rank and file?

Resources
Big institutional investors are not voting against big pay packages for top executives — but they are voting against huge pay disparities that seem to reveal underlying problems.

Are employees at these companies freaking out? If you’re applying for a job at a company with a huge CEO-to-median-pay ratio — well, would you apply for a job in such a company?

What do you think it would mean for your compensation over time?

Should you take that job?

How to use it

When HR asks if you have any questions, try this one, courtesy of the good folks at As You Sow: What’s the ratio of your CEO’s pay to the median employee salary here?

How else can we use this news?