When someone threatens a member of this community, I get upset. For the past 10 days I’ve been doing research on SevenFigureCareers to find out who’s behind it. I found myself going down an Internet wormhole. Now I’m back out. 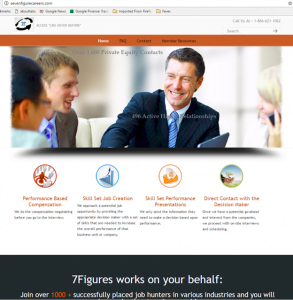 SevenFigureCareers claims to be a “Recruiter Network” with “over 2,400 Associates” and “Over 1,600 Private Equity Contacts.” For a fee, it will give you “Access to Confidential Jobs” and “Hidden Opportunities.” (See SevenFigureCareers: Had an encounter?)

After John Rice [not his real name] had a bad experience, he found the Ask The Headhunter community was already talking about SevenFigureCareers. So he posted in the comments section, and requested more information from others.

Within a matter of minutes, he sent me an e-mail:

“Hey, Nick — Please take down the post I made today re: Arthur French.”

As long as someone isn’t playing games, I respect a reader’s wishes. We all sometimes blurt out something in a discussion forum that we wish we could take back. So I removed John’s comment, but I asked why he wanted it taken down. “Call me,” he wrote back.

Rice was irritated and worried.

“As soon as I posted my comment, I got an e-mail instantly from an attorney in Texas. Cease and desist, it said. Then somebody else from SevenFigures contacted me and said, if you take it down we won’t sue you. That’s when I contacted you.” 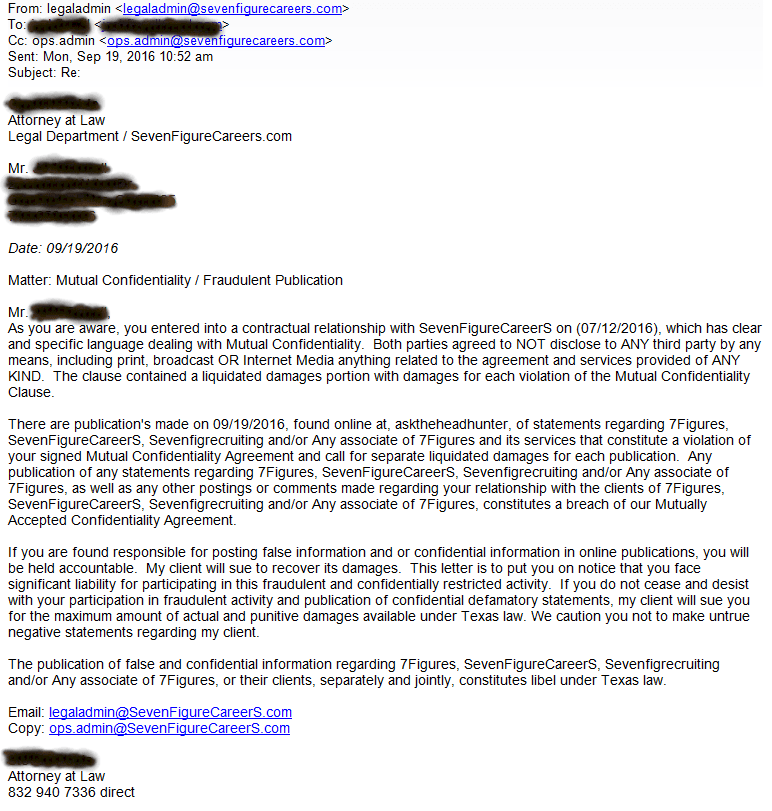 I asked John if he’d called the lawyer. Of course, he said. He left a voicemail because no one answered — but the lawyer never called him back.

Much of a headhunter’s time is spent doing research, specifically, checking people out. It’s hard to hide from me if you’re trying to do business with me. Or if you’re causing trouble.

When I research people, I go to independent sources where I know I’m getting information they cannot manipulate. The State Bar of Texas was my first stop. And there was the lawyer in the directory — same name, different phone number. His record was reported as clean.

I wanted to make the call myself, but I know better than to interfere in a legal matter — so I asked John to call the lawyer at the number I’d found listed for him on the State Bar website. John’s my kind of guy — he didn’t hesitate and was excited about getting to the bottom of this.

We both expected we’d find a kind of Better Call Saul attorney — a slime who would write a nastygram like that for a fee. What troubled me was how sloppy the e-mail was. I’m not a lawyer, but my lawyer has taught me enough about contracts and legal documents that I couldn’t imagine a real lawyer writing crap like that.

“Nick, I can’t believe it. He says he didn’t write the e-mail. Had nothing to do with it. But he’s pissed off.”

Frankly, I couldn’t believe it, either. Who would be stupid enough to impersonate a lawyer so brazenly?

With John’s permission, I called the lawyer myself. He said the threatening e-mail “was definitely not from me.” However, he had done some work for “a SevenFigures entity” about a year ago but had not had any relationship with them “for quite some time.”

He didn’t recognize any of the names connected to the firm that Rice and I shared with him — including Arthur French –, but he would not go into the details of work he had done for his client. This is exactly what a lawyer should say.

Since he had spoken to Rice, he said he had been “trying to figure out who was behind that e-mail” but has not been able to. He closed by saying he was going to contact his old client, and the Texas Bar Association, because he was “extremely concerned about the use of my name.”

Was he telling the truth? He was being as cagey as a good attorney should be, and I have no concrete evidence that he was involved, so I am not publishing his name unless I learn otherwise.

Meanwhile, I shared the e-mail with a New York consumer class action attorney. His comment:

“Engaging in the unauthorized practice of law is a crime in Texas (and every other state). See this link: http://www.txuplc.org/. Please keep me updated.”

What matters most is that the e-mail threat came from a sevenfigurecareers.com address, and someone at the firm was impersonating an attorney. That’s a crime. Fraud. [UPDATE: Shortly after this article was published, the SevenFigureCareers website was shuttered.]

A search for the telephone number of the lawyer in the e-mail turned up a surprise: a press release (dated September 1, 2016) on Online PR Media about “7F-SevenFigCareers” including a media contact named Philip A. Alia. (I’m disclosing the PR agent’s name because, unlike the lawyer, he has made his connection to SevenFigures public, online.) Beneath his name is a contact number: the same number under the lawyer’s name in the threatening e-mail.

What putz would put out a fake threat from a lawyer and list a phone number that traces back to his own company’s press release? (See Stupid Recruiter Story #1.)


I tracked down Alia like I did the lawyer — through other independent sources. He’s a public relations consultant, and said he had done just one press release for “CR Nicholas” at SevenFigureCareers in December 2015. He admitted he didn’t even write it. He just placed it in the media. Alia also knew Arthur French, who is quoted in the press release. But Alia said he had done no other work for them. When I pointed out the September 1, 2016 press release, he seemed genuinely surprised. He had nothing to do with it — so I suggested he might want to bill them for it. There is no indication Alia has any other connection to SevenFigureCareers.

Alia’s experience seems to mirror the lawyer’s. One assignment for each, then SevenFigures appropriated their names and used them fraudulently. In the case of the lawyer, someone at SevenFigureCareers impersonated a Texas attorney to threaten and intimidate John Rice.

I won’t stand by when scammers threaten members of this community.

Earlier today the SevenFigureCareers.com website was altered. The 7F logo is gone as is much of the promotional verbiage. Most of the site is now locked down behind passwords. If you type the URL into your browser, the site comes up. But if you click a link to get there, the site yields a blank page with “Nope” in a box at the top. (But if you then put your cursor at the end of the URL in your browser and hit Enter again, the site comes up.) It seems they are trying to avoid inbound links from other sites — like from this article.

It turns out 7F has an interesting history. It’s an old Texas cattle brand, originated by the grandfather of a rancher whose business has long been registered as 7F, Inc. with the Texas Secretary of State. We had a long talk. He and his brand have got nothing to do with SevenFigureCareers — but he sure wants to know who’s using his grandfather’s brand as their logo.

How does a phony recruiting firm operate? See 7F: Anatomy of A Recruiting Scam.