In the July 26, 2016 Ask The Headhunter Newsletter, a reader plans to reject a job offer that might be saved. 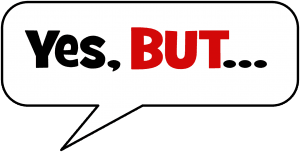 In Fearless Job Hunting Book 9, Be The Master of Job Offers you suggest how to decline an offer when you have two job offers — so as not to burn my bridges. I’ve got a different problem. I should decline a job offer but I don’t want to!

While I have not received an offer yet, it became clear after the final interview last week that this department is not flexible about working hours. The job is in the middle of Boston, and it would increase my commute time. I am not willing to do that for this position. I want the offer, but can I be honest about the commute time as the reason I would decline?

I’d be frank about your commute problem if they make an offer. But if you want to avoid ending the discussion, there’s a way to finesse it.

When I want to say no to a deal, I like to take an affirmative approach. So I say YES but. If all the other terms are to your liking, ask yourself, What would make me want to accept the offer?

Then phrase your response to the offer like this.

How to Say It
“I’d like to accept your offer. I want the job and I want to work on your team. But I’d like to discuss the terms with you, if you’re amenable to it.”

(You’re not actually accepting the offer. You’re starting a negotiation by saying you’d like to take it. Remember that negotiations aren’t just about money! There are lots of terms you can negotiate.)

Pause and let them respond. They’ll ask you, What terms?

How to Say It
“The problem is the commute. We all know commuting in and around Boston is a big challenge. The traffic is horrible. But I can deal with it if you could make an accommodation on the work hours. I’ll of course work at least X hours per day. I want to make sure I’d be delivering the value and work you need from me – I don’t expect you to compromise on that. But can we discuss a flexible work schedule to help me deal with the traffic?”

Note that you’re not demanding anything. You are asking for a discussion. No matter how they respond, you will have given an affirmative response and a request for a reasonable accommodation. If they blow it at that point, it’s on them.

The power of this approach lies in starting out with YES. This is what most of the negotiating methods I discuss in Be The Master of Job Offers are about: — saying YES that means maybe, if you’ll work with me on the terms. This tells them the main question is already resolved – you want the job. All that remains is working out the terms, which you’ve indicated you’re happy to discuss, after you’ve notified them that the commute is the issue.

Believe it or not, the most important commitment you can make to an employer is to say you want the job. That commitment puts you on good footing to discuss terms.

Try it. The worst that will happen is they’ll say no. But when you’ve indicated you want the job, an employer is more likely to come back with an alternative that’s good for both of you.

I wish you the best with this. These articles may be helpful when you’re negotiating:

When to stop negotiating a job offer

How do you negotiate when you want a job, but the terms are not to your liking? What would you do in this case?