In the July 19, 2016 Ask The Headhunter Newsletter, a reader bemoans the effect of “stupid” technology on hiring. He doesn’t realize he needs to get a dog. 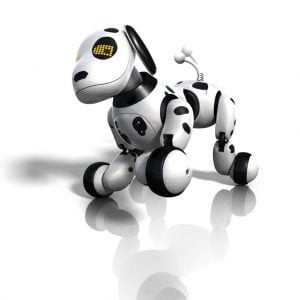 I saw a disturbing story on Bloomberg: Goldman Scraps On-Campus Interviews for Robo-Recruiting. It’s about how fewer companies are doing on-campus interviews because of the lack of jobs. Rather, some companies are having a machine do the interview. I cannot tell you how stupid I think this is. I am sure you will agree.

As an electrical engineer, I have to say that this is a misuse of technology — people like me might make such technology possible. I’m tired of hearing about “disruptive technology.” If this is the future, I want no part of it. What is happening here?

Employers have given new grads no choice but to send robo-dogs to their job interviews to woof it up with the employers’ robots.

At the same time companies like Goldman Sachs complain there’s a skills shortage, they demonstrate a complete lack of recruiting acumen.

About 12.6% of college grads are underemployed, meaning they don’t work enough hours.

Then CNN quotes a recruiter:

There is a real skills gap. [Many college grads] don’t know where their education and skills fit in the workforce.

It seems this “Wall Street titan” can’t figure out what to do with skills and education, either.

How does this smell?

CNN says “the U.S. economy has a record number of job openings.” The U.S. Bureau of Labor Statistics confirms there are 5.6 million open jobs.

NewsHour’s Paul Solman calculates that around 19.5 million Americans are either unemployed, under-employed, or looking for a job even though they’re no longer counted as unemployed or as part of the work force.

That’s a ratio of 3.5 job seekers to every vacant job. While not all job seekers are qualified, there’s hardly a talent shortage. But employers like Goldman Sachs claim there is — so, what do they do to pick the right candidates?

Edith Cooper, Goldman’s global head of human capital management, says she’s got a really novel way to recruit and entice the elusive qualified new grad. She has stopped sending humans to interview them:

We’re trying to take out an individual’s assessment of talent.

The Wall Street titan announced last week it will ditch on-campus interviews starting next year for undergraduates in favor of an automated interview recorded by HireVue, a Utah-based company that creates software for recruitment.

If the head of Goldman’s HR isn’t getting it, here’s an analogy the head of sales might understand. There are millions of investors hungry for good investments, so Goldman’s stock brokers should stop selling — and wait for investors to beg for a Goldman account.

Beg to work for us!

In a job-seeker’s market, new grads must subject themselves to machine interviews, invest their time filling out online applications, and wait like starving dogs to be fed. Meanwhile, Goldman Sachs HR managers get paid to wait for bots to do their hiring. Disintermediation, anyone? 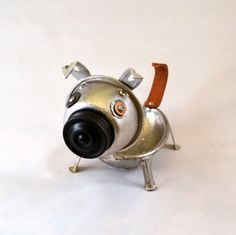 It seems not to occur to the Goldman Sachs of the world that they can’t find talent because they’re not looking for talent. It’s the proverbial story of washing your hands with rubber gloves on. It’s surrogate interviewing. Outsourced hiring. To use another metaphor, rather than going out to meet the talent, Goldman Sachs is sending a robo-dog named HireVue with a note in its mouth. Machine interviewing.

I’ve written about the likes of HireVue before: HR Pornography: Interview videos, WTF! Inflatable Interviewer Dolls? This is not disruptive technology. This is outsourced corporate irresponsibility.

In the midst of the claimed “talent and skills shortage,” CNN says the percentage of big-name employers that go to college campuses to recruit has dropped from 89% in 2007 to 76% today. They’re so desperate to find and hire talent that they’ve stopped recruiting! Worse, in a job-seeker’s market, Goldman tells job seekers to do tricks to get jobs.

Recruiting requires selling — something a stock brokerage company should know a lot about. It requires personal contact, persuasion and, yes, a soft touch. Especially during a talent shortage.

Let’s go back to that analogy. In an effort to boost sales, Goldman Sachs tells its stock brokers to stop selling. Instead, the company publishes advertisements notifying investors that if they want to do business with Goldman, they must log-on to a third-party website and record their request for help with their investments. The selection algorithms are waiting! If you qualify, Goldman may do business with you.

Better yet, imagine this. You make it past the HireVue machine and Goldman invites you for a real interview. You respond with a link to your website and invite Goldman to record answers to questions that your own software will analyze to determine whether Goldman qualifies as a place you’d like to work.

Now, that’s automated personal service only a bank can appreciate!

Send in your dog

Elise Gould, a senior economist at the Economic Policy Institute, said to CNN:

Recent college graduates are having a hard time finding a job — finding a good job has become much more difficult. 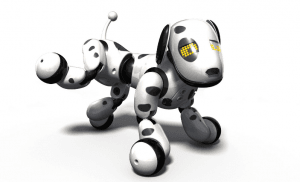 I’ve got an idea to make it easier on graduates.

Goldman schedules an interview where a personnel jockey will conduct a screening interview before you are permitted to meet the hiring manager. (Remember: There’s a talent shortage and Goldman is really desperate to impress and entice good applicants.)

Here’s the good part. You hire your own dog. You send a surrogate to the interview, so you won’t waste your time. (Perhaps you rent the dog from HireVue.) If anyone asks how you dare to send a dog with a note in its mouth, you cite the CNN article:

Goldman says it’s trying to weed out any biases between job candidates and interviewers, such as mutual friends, interests in the same sports or same schools.

You’re just trying to make sure the interview is fair and unbiased.

Do robots dream of job offers?

Is Goldman Sachs really suffering from a talent shortage and skills gap? While new college grads are dreaming of job offers, are industry titans working hard to find, recruit and hire those rare applicants they really need?

HireVue CEO Mark Newman is laughing all the way to the bank. I’m laughing at Goldman Sachs’ HR managers, who are deploying auto-mutts to bark at college grads. Woof!

If you’re the talent, and you know how difficult you are to find, I refer you back to last week’s column — with apologies for yet another metaphor: Tell HR you don’t talk to the hand. (For some solutions, see HR Managers: Do your job, or get out.)

What do you think? Are new grads just not ready for real jobs? Or are employers not ready to hire anyone? Maybe you should throw the employer’s bot a digital bone.