These industries are more likely to screw you on pay

In the May 24, 2016 Ask The Headhunter Newsletter, we dispense with the Q&A and explore some bad news about who’s hogging the profits.

The trend is hardly worth debating — you pay more to get less. And now we know for sure that it’s hitting your paycheck, too: As corporate profits soar, you get paid less for your work.

I love capitalism, but this isn’t capitalism — it’s greed, and it’s putting our economy and our society at risk because it’s devaluing the work you do and killing your motivation to be more productive. 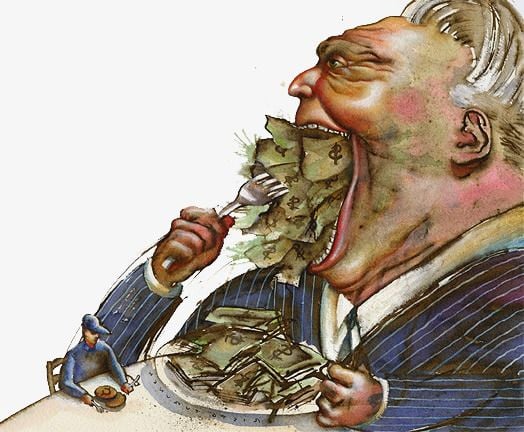 The irony is that a guy at JP Morgan Chase — a big bank making big bucks — has spilled the beans. Bloomberg reports that JPM’s chief economist, Michael Feroli, recently published a research note that reveals — Ta-Da! — “workers’ slice of the economic pie is getting smaller.”

It’s doubly ironic because JP Morgan’s first-quarter profits beat estimates — while the firm slashed bankers’ pay. Even the bankers that are screwing us are getting screwed!

Feroli sharpens the point and explains the connection: As big business gets bigger, there’s a clear link between increasing concentration of ownership and “labor’s declining share… of the value a company creates.”

Which is the long way of saying, you’re getting the shaft while The Man gets richer. The owners of those industries make out while your paycheck gets smaller.

Sheesh — I never thought I’d find myself talking like a workers’ rights nut.

So I’ll make myself clear: While I worry about workers, I worry far more about the gross imbalance between the value of work and what people get paid to do it. Even more than I worry about tired employees’ families going hungry due to stagnant wages and salaries, I worry that American productivity and ingenuity are at risk — because who’s going to be productive and inventive if that behavior is not going to pay off?

It’s worse than you getting paid less. Our entire economic system is at risk because the concentration of ownership and wealth has reached such critical mass that it seems it’s going to destroy itself by ignoring a basic tenet of capitalism — at least according to my definition: Profits spur motivation to do more profitable work when those that create profit enjoy the rewards.

What happens when workers — at any level and in any kind of job — see where the profits are going? I think it spells trouble.

Rather than discussing the regular Ask The Headhunter Q&A column this week, I’d like to ask you to please read Peter Coy’s short article about Feroli’s work in Bloomberg Businessweek: Rising Profits Don’t Lift Workers’ Boats.

And then, if you dare, skim a report written by Jason Furman, chairman of the president’s Council of Economic Advisers: Benefits of Competition and Indicators of Market Power. It’s dense, and one of Furman’s conclusions will seem obvious:

“When firms take action to impede competition, through anticompetitive mergers, exclusionary conduct, collusive agreements with rivals, or rent-seeking regulation to restrict entry, their profitability may increase, but at the cost of even greater reductions in consumer welfare and societal benefits.”

“…industries with more concentrated ownership… pay out their extra profits to shareholders, or to the government in taxes, but not to workers.”

Draw your own conclusions. Then let’s talk about whether you’re getting paid less — and whether it’s because a concentration of ownership and wealth doesn’t reward the people who come up with the ideas, do the work, and create the wealth.

Since this is Ask The Headhunter and my purpose is to give you a takeaway to help you be more successful — here it is, based on the sources I’ve discussed above: It seems you’ll earn better pay working in an industry where there’s more competition and less concentration of ownership. So pick your job targets wisely.

Feroli’s and Furman’s work suggests, for example, that the healthcare industry pays more of its income to employees, while the transportation and warehousing industries (which includes airlines and railroads) pocket more of the profits and leave workers in the lurch.

Here’s how various industries stack up in terms of the revenue share controlled by their 50 biggest players. According to Bloomberg, Feroli’s analysis suggests “the share workers got tended to decline in industries where there’s more consolidation.” That is, when more revenues are controlled by a smaller number of firms (“consolidation”), the less that industry is likely to pay to its workers. 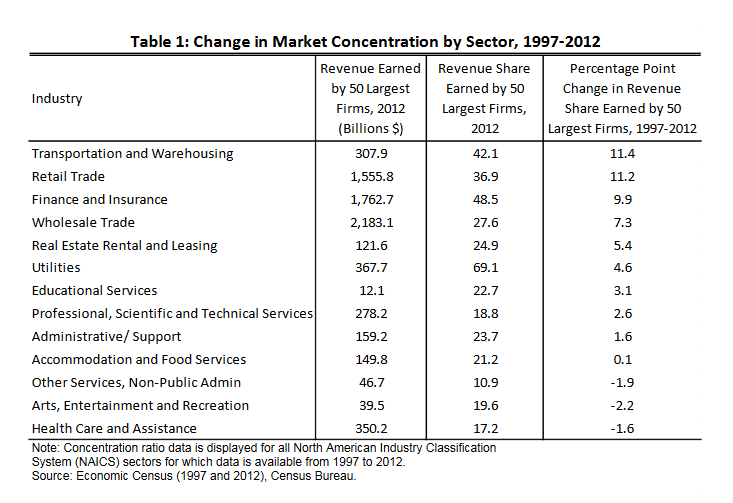 Of course, being the smart little community you are, you already know which industries are the problem…

If you need help assessing specific employers, these Fearless Job Hunting books will help you with these specific issues:

How can you tip the balance back towards making your work more profitable to you — when your work is profitable for your employer? Or has our economy shifted so far that it’s going to tip over? In your experience, which industries share the wealth — and which of them pocket the profits you help produce?