Reddit’s Ellen Pao: Your pay is what I say 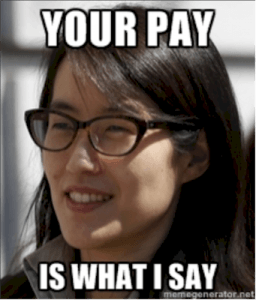 Well, I’ve got a simple answer to that: I’ll go interview somewhere else, where candid dialogue is welcome.

Pao’s purported aim is to help women avoid discrimination. According to studies she cites, male and female managers reject women who negotiate assertively. But changing the rules the way she has at Reddit will likely result in lower compensation packages for men and women — something CEOs get patted on the back for by shareholders.

I don’t think much of anyone who doesn’t negotiate assertively, male or female. Curtailing negotiating hurts everyone and avoids the real problem. Here’s an analogy: Certain people are not allowed to sit at the lunch counter. So the lunch counter is removed to eliminate discrimination.

Is that a solution? Of course not. Neither is Pao’s policy.

If the studies Pao bases her action on are correct, the way to create salary parity is to change the way men and women respond to women who negotiate. Pao’s solution cheapens women who dare to negotiate — but in the end, it’s those women who will change the system. Shutting them down accomplishes nothing in the long term but to save money for employers.

Is Pao’s policy really going to make getting a job more fair for women? Or does it make dumbos of us all — men, women, job seekers and hiring managers alike?