How your old boss can cost you a new job

In the April 15, 2014 Ask The Headhunter Newsletter, a reader worries about how much “notice time” is enough when quitting a job:

I’m a licensed professional working in a small firm. During lean years a few years ago, my boss arranged for me to do some other work so that he wouldn’t have to lay me off. I even did some dog and house sitting for him. So we are close. Nonetheless, now it’s time for me to move on. I will not consider a counter-offer or any back-and-forth negotiations.

I’ve heard my boss say that if anyone leaves the firm, he’d like a month or two notice. I’ve read your thoughts on this, and I agree a long notice is a bad idea — potentially a trap for being abused during the transition period, and who would wait one or two month’s for a new employee to start work? Frankly, I’m hoping to give two weeks’ notice and to take a third week for vacation between jobs.

When I leave, I’ll do all I can to leave my desk in good shape for my replacement, but the firms I’m interviewing with will want me to start quickly. Is there a good way to go about this?

Your boss’s wishes are one thing. Reality is another. As you’ve clearly realized, your own career safety is paramount, no matter how friendly you feel toward your current employer. Your old boss can cost you your new job. 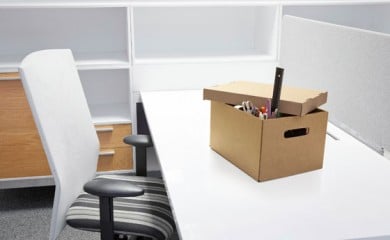 Here’s the message you need to deliver to your boss when — and only when — you have a bona fide, written job offer in hand and you’ve accepted it and have a firm start date:

How to Say It
“It’s time for me to move on. I’ve accepted a job at a firm where I can continue growing my career in directions that are important to me. I’d like to give you two weeks’ notice. Of course, I will devote that time to helping organize my work to facilitate the transition to someone new – anything you need.”
[Note: I’ve modified this suggestion thanks to a comment from GEM below.]

Stop there. Your boss may not ask for more time. Or, it’s unlikely but I’ve seen it happen, he may ask you to leave immediately. (There’s no guessing at how an employer will react, so plan for the worst.)

If he presses you to stay for more time, try this:

How to Say It
“I wish I could do more, but in today’s economy no company I’ve talked with permits the kind of transition time I’d like to give you. My job offer is contingent on a quick start date.”

Don’t complain and don’t explain in any more detail. Do the right thing within the constraints you have. And let your old employer deal with the rest. Don’t let him turn your business with your new employer into his business. Don’t fool around with requesting an extension on the start date for your new job. The answer might be a withdrawn offer. (Be sure you’re Starting a job on the right foot.)

Again, be prepared to be shown the door immediately if your boss gets upset. (Now I’ll shock you a bit: If you have personal belongings in your desk, get them out before you announce your plans.)

There’s a standard for doing the right thing, and that’s two weeks’ notice. I know it sounds cold, but you don’t owe anyone any more, even if they cut you a break during hard times. If you want to try to return that favor, do it in a way that won’t cause problems at your new job. Offer to recommend a candidate for the job, if you can. Offer to help write the job description and to help interview applicants during your notice period. Offer to work late during those two weeks, if necessary. (The guy did you a solid; do one for him to the extent you can.)

Part friends if you can. And when you get that new job offer, remember that there is no sure thing. I wish you the best.

What do you owe your employer when it’s time to move on? I’m sure you have more ideas and even some personal policies. Should this reader try to extend the start date at a new job?