Is it ethical to go on this job interview?

In the April 23, 2013 Ask The Headhunter Newsletter, a loyal employee wonders whether it’s honest to go to a job interview:

I’m working for a great tech company on the west coast in a job I enjoy, but I was approached by a recruiter from a large company in the midwest for an interesting job. It would be a significant move up in management in a bigger and more well-known company. My concerns are these:

My question is whether it is unethical for me let them fly me in to interview if I don’t feel 100% sure I’d take the job. They approached me and seem to think I’m a good candidate, so they’re moving a bit faster than I’d like.

I admire your integrity, but exploring the unknown doesn’t subject you to a higher ethical standard.

This company is recruiting you. As long as you have a sincere curiosity and interest in exploring what they want you to do, I’d go. When we meet someone and ask them out, we don’t explain, “Well, I’d like to go out with you, but I’m not sure we’d ever get married.” Of course you’re not! The only question is, are you attracted enough that you’d like to get to know one another better? 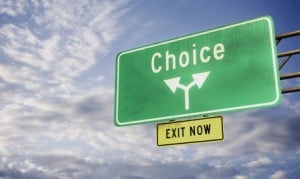 That’s where pleasant surprises come from.

Keep this big fact in mind: No one has asked you to marry them yet. I mean, no one has made you an offer.

Some companies (and people) move faster than others. Frankly, among employers that’s rare and it’s a good sign. If the new company seems to have good people, a good reputation, and exciting new products in its pipeline, then I think it’s a solid potential employer. But you’ll never know what might stimulate you to take it very seriously unless you show up.

In the end, if they make you an offer, it’s still all up to you. You’ll never figure out what weight to assign to each of your concerns until you have a real choice to make. It’s better to have a new choice than not to. Even if you say no, you can still be friends. And if you say yes, you can still be friends with your old company. Remember: People leave companies, and companies lay off people — it’s called business. How the personal and social sides of it play out is really up to you. And I get the sense you’d make it okay either way.

You might not be sure why you’re interviewing with this company, but I am. Your list of concerns tells me you don’t feel safe. That’s reason enough to explore other gigs, and there’s nothing unethical about it. The Wall Says It’s Time to Go may be a helpful map through your concerns.

What triggers you to consider another job? What stops you? Can you have an honest interview if you’re not sure you want the job?