How to Boost Your Salary Quickly and Often

In the May 8, 2012 Ask The Headhunter Newsletter, we’re covering something different: A wild story…

From The Headhunter Files

People seem to enjoy hearing some of the stranger stories from The Headhunter Files. I usually share these only in my live presentations and workshops, but I think it’s time to go public. Rather than Q&A this week, we’ll do a “Headhunter File,” and if subscribers enjoy it, we’ll do this as a regular feature in upcoming editions.

Fred was an engineer I spoke with while I was checking references on another engineer during a search I was conducting in Silicon Valley. No one had recommended Fred to me (you’ll see why this is pertinent later) — but after my reference call was done, he asked me if I could help him land a better job. I took his resume and filed it, but I wasn’t working on any assignments he’d be a fit for anyway.

But Fred was persistent. He called me again and asked why I wasn’t helping him out. I explained that I didn’t find jobs for engineers — I found engineers for my clients, based on specific requirements. Here’s roughly how the conversation went.

Fred: “But if you’ll help me, I’ll make you a lot of money.”
Me: “I’m sure I could earn a good fee placing you, if I had the right assignment.”

Fred: “Just send me to interview with any of your current clients. I’m very good at getting job offers. You’ll earn a fee quickly and it will be good for both of us.”
Me: “Sorry, I don’t work that way. But since you brought it up, what’s your specialization? What do you do, exactly?” 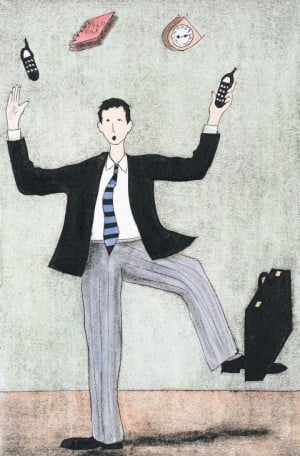 Fred: “No more than six months. My goal is to get my salary up as high as possible.”
Me: “Don’t you think you’re building a reputation for jumping around?”

Fred: “Employers want the best people they can get, and as long as they pay me and my salary keeps going up, I’ll go wherever I have to.”
Me: “Sorry, but my clients don’t pay me fees for engineers who will pack up and leave every few months. You should be careful.”

Fred: “There’s no need to tell them I changed jobs recently. I’ve only been here two months. Just tell them I’m still at the last company. And that would be true. I’m doing both jobs.”
Me: “You’re working at two companies at once?”

Fred: “If you’re going to tell anyone, let’s just forget it.”
Me: Click.

I could have said something more clever, but I just told Fred to bug off. He never told me where he worked, and I didn’t want to know. Since no one had recommended Fred to me — another engineer used him as a reference — I had no context for a relationship with him, and no one to blame!

How was it possible for Fred to keep jumping jobs, getting 10%-20% higher salaries, and not get caught? He told me he worked odd hours, but that’s common for engineers. He’d put in just enough time at each job to keep his head above water, then leave when things got hot. After around three years, he’d boosted his salary by over 50%, and made much more than that by holding two jobs at a time. He made sure to stay employed, so headhunters would call him with interviews — he’d figured that much out. He was “working” headhunters who filled jobs without asking too many questions.

Fred said he was “making jobs pay.” You could say Fred was just playing the market, and beating employers at the salary game. He’d lucked into some employers that didn’t do much background checking — or that trusted “headhunters” to do it for them.

I write a lot in this newsletter about employers that go too far with background checks, and about job hunters who get abused in the recruiting process. But employers sometimes take it between the eyes, too, from unscrupulous “salary hunters.”

What Fred was doing can be done — but not for long. The issue wasn’t the salary boosts he was getting — that’s a matter of negotiating. The problem was that he wasn’t comitting to a job, and that was his routine.

Do you think people can hold down multiple jobs of the same kind, and do it successfully and legitimately?

I didn’t keep up with him, but my guess is Fred didn’t spend many years in the engineering profession. I’m sure he got busted. There are many lessons in stories like this. What do you get from this one?

Got a good, weird tale of job hunting or hiring? Let’s hear it! (Want to hear more true stories from The Headhunter Files? Let me know!)