How do I tell my boss I’m overworked? 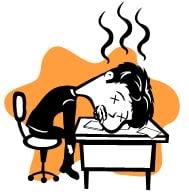 In the June 21, 2011 Ask The Headhunter Newsletter, a reader worries about burnout because the boss has piled on too much work:

I’ve had more and more work piled on me until I’m a bundle of nerves and stress. I like my job a lot, and the pay is good. But, I have now inherited more work than I can handle. I’ve absorbed the workloads of two people who left. I’m only one person and can only do so much in a 16-hour day! (Isn’t it supposed to be 8 hours?) Help!

Even people with a good work ethic must sometimes tell management, “This is too much!” This goes for top executives, for professional staffers and even for blue collar workers.

Part of your job is to tell your boss the truth: The work you do requires more manpower. As long as you accept more work, the company will continue to heap it on. It’s their fault for expecting so much, but it’s your fault for letting them think you can handle it.

Don’t tell your boss you’re having a problem. Explain that you have “the work” organized now, and show your plan, including the requirements for additional staff. No complaints; just the facts. Don’t be afraid to do the job your way. It is your responsibility to explain what needs to be done to handle the work effectively, but not to work 16-hour days.

If you don’t deal with this now, you will probably face overwork at your next job. The sign of a good worker is dealing with the demands of the job, not taking on the functions of other workers yourself.

A caution: Some companies prefer to kill an employee with work rather than invest in doing the job right. If this describes your company, be prepared to start looking for a new one. I hope your employer is ethical. You owe it to yourself to have a job that’s reasonable.

(Note: When you get to heaven, St. Peter doesn’t give you extra points for having worked yourself to death.)

First it feels like an opportunity: Your boss seems to be offering you more authority. But it turns out to be merely more responsibility and work. What started out as a chance to prove what you could do, has turned into your boss expecting you to do more than you can possibly do. Is there a way out? Let’s talk about getting over-worked, and burning out. Can this be turned into success?