How you get cheated out of job offers

Any good company will tell you that it loses business sometimes, to unscrupulous competitors who make promises to customers that they can’t keep, and who will quote artificially low prices to win business. The honest company loses money immediately, but it takes time for the naive customer to realize that the promised product at the lower price is of inferior quality; that customer support is non-existent; or that the vendor is just an outright fraud.

The customer gets hurt, and the honest vendor loses business.

It’s no different in the world of job hunting and hiring. While I believe people are generally honest, we’re kidding ourselves if we pretend that liars and cheats don’t steal jobs from honest job applicants.

We all know what the problem is: A troubled economy, employers that are hesitant to hire, and databases full of millions of resumes that employers pore over to find job candidates for you to compete against. It all lends itself to dishonest business.

So, you apply for a job, and you lose it to someone whose credentials are more stellar than yours. Or are they?

Employers today use sophisticated methods to check references, right? Quite a bit of the time, that’s wrong.

Many companies don’t check references at all, or they do only a cursory check. Worse, they outsource reference checking to naive “investigators” that are in too much of a hurry to do a good job.

Even when the human resources (HR) department does the checking, fabricated backgrounds and credentials can fool anyone but a savvy hiring manager who knows what questions to ask about a candidate’s work skills.

Just as you can buy a professionally-written resume (Is that a lie by itself, because you didn’t produce it?), you can buy fake college degrees and credentials. And now, with the help of a new kind of dirtbag “service,” liars and cheats can fake their entire background and their references. That’s who you’re competing against. 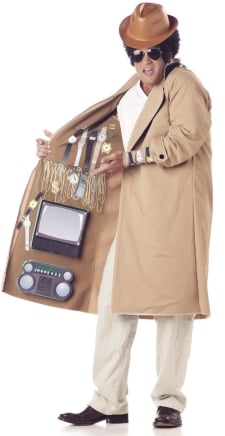 But who would fake their entire background if it could get them tossed into jail?

Q) Is all of this legal?
A) YES! Perfectly Legal. Misinformation on a resume isn’t a crime!

So says TheReferenceStore.com, which will fake everything you need to convince an employer to hire you. Once you pay the fee, this fraud engine will create an entire fake record, including:

Is this really legal? I’m not a lawyer, so I don’t give out legal advice, but it seems that unless you’re lying to a legal authority or on a certification or contract, misinformation is “little more” than a blot on your integrity and reputation. TheReferenceStore.com says:

Q) What if I get caught?
A) With all things, there are risks. If the deception is discovered, you could very well be terminated; evicted or suffer embarrassment and humiliation.

In a MediaBistro interview, TheReferenceStore’s operations manager, David Everett, tells of a customer who paid the fraudster company “to build out a fake broadcast journalism career path. The new resume showed him growing in the business all the way to executive producer for a large radio station in the Great Lakes area.”

“‘We built two separate fake radio stations and one fake TV station,’ Everett explains, ‘where he claimed to have worked as an intern, writer, associate producer, and producer. We wrote a beautiful resume to correspond with the virtual history we created.'”

How does Everett sleep at night? Probably with hundred dollar bills wadded under his pillow. Beneath an image of a man praying, the website’s contact page playfully says, “Closed Sunday. And Brother??? We need it.”

How do you compete with liars and cheats that use services like this?

Avoid hiring channels that expose employers to fraud.
Don’t apply via job boards or through blind resumes to the HR department, which might be suckered by candidates that supply convincing misinformation. When you get in the door through personal contacts who vouch for you, much of your competition disappears, because you’re the candidate with the proverbial inside track.

Of course, a job candidate who pays for a fraudulent history cannot claim to be from a major company — it would be too easy to check. But an HR manager may not realize that a reference call to a former boss’s home is actually being answered by David Everett. (“Just like the REAL thing.”)

Educate the employer.
How can you avoid being compared to people with glowing but fake credentials? Take along a copy of this newsletter, and offer to show the employer — right there on her own computer — how the fraud works. Ask the employer, “Do all your candidates demonstrate that they can do the job? I’m ready to do that.” (While How Can I Change Careers? is written for career changers, it’s for anyone who wants to stand out in the interview by showing they can actually do the job.)

If you feel you’ve got to join ’em because you can’t beat ’em, consider that Lies, lies, all lies just aren’t worth living with.

Well, now… isn’t this all a tad sensationalized and unreal? What if the employer Googles a fake employer or turns to higher-level verifications, like the state department of commerce where a fake company is supposedly located? Certainly, the fraud will be exposed. But not all the time. And not by all investigators. Many employers outsource their reference checking clerks who look only where they’re told to look. Then you lose. And the gamble pays off.

What can employers do to protect themselves?

Limit the bureaucracy.
Employers should stop relying heavily on indirect candidate assessment methods like resumes, job application forms, and credit and background checks. Those are the security holes that dirtbags like TheReferenceStore are good at exploiting. They can fabricate references, but they can’t influence people you know and trust.

Recruit through personal contacts.
Have department managers talk to applicants before you put them through the mindless meat grinder. A savvy manager will spot a fraud that a greenhorn personnel jockey might not. The more personal the contact that brought the candidate through the door, the less likely the credentials are fake.

Use the legal means at your disposal.
When you recruit people that you found through personal sources you trust, the last thing you want to do is “process” them before they meet or talk with a hiring manager. But when you get to the point of filling out an application form, make sure it has teeth. Candidates should sign a statement attesting to the truth of everything on it. Don’t make it onerous, but make it a legal document. Explain to the applicant that the company does not tolerate lying or cheating: “That’s to your advantage. We try to make sure you’re competing with other honest applicants.”

Then, fire liars and publicize the fact that you do.

Playing the odds that HR is lazy

TheReferenceStore posts extensive disclaimers to protect itself legally, and makes it clear that you could get fired (and worse) by using its services. So, why do people use it? Because odds are, the next candidate a company interviews is honest. And the odds are against your having to compete with a liar or a cheat when you’re looking for a job.

That’s what TheReferenceStore counts on: Its lying, scum-sucking customers are rarities in the job market. No one is expecting them. Those customers are betting that no one will carefully check all those thousands of unknown applicants that employers process every day. Someone will slip through. To liars and cheats, those are acceptable odds. Remember: We’re not talking about people with integrity here.

That’s how companies unwittingly hire liars and cheats, and it’s how you get cheated out of job offers.

You were the best candidate. But the other guy cheated, lied, and faked his way into a job offer. You probably didn’t even know it.

Or, your company finds its candidates on job boards and outsources reference checking because HR is just too busy handling all those thousands of applicants coming through the pipeline. Do you know who your employees really are?

Dirtbag companies that sell fraudulent identities count on you to keep moving right along after you get screwed. How do you protect yourself from cheats and liars? Have you encountered cheats? Has your company caught one — especially one that used a service like the one described here? What did you do about it?