Greedy employers cry “no one wants to work anymore”

The Myth of Labor Shortages 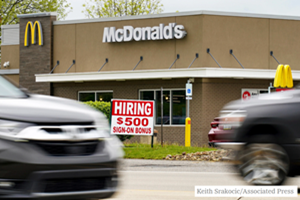 The idea that the United States suffers from a labor shortage is fast becoming conventional wisdom. But before you accept the idea, it’s worth taking a few minutes to think it through. Once you do, you may realize that the labor shortage is more myth than reality.

One of the few ways to have a true labor shortage in a capitalist economy is for workers to be demanding wages so high that businesses cannot stay afloat while paying those wages.

If anything, wages today are historically low. They have been growing slowly for decades for every income group other than the affluent. As a share of gross domestic product, worker compensation is lower than at any point in the second half of the 20th century. Two main causes are corporate consolidation and shrinking labor unions, which together have given employers more workplace power and employees less of it.

Corporate profits, on the other hand, have been rising rapidly and now make up a larger share of G.D.P. than in previous decades. As a result, most companies can afford to respond to a growing economy by raising wages and continuing to make profits, albeit perhaps not the unusually generous profits they have been enjoying.

We discussed this recently: The labor shortage is really a pay shortage. David Leonhardt explains it better than anyone: Wages are historically low and corporate profits are huge. Employers on the whole can afford to raise wages without any real pain. It’s time to shut down the economic bullies crying that lazy labor is living off pandemic relief funds.

What’s your take? Is there really a labor shortage or is it about greedy employers? Are they unwilling to spend what it takes to keep their businesses profitable? Is this greed in action?