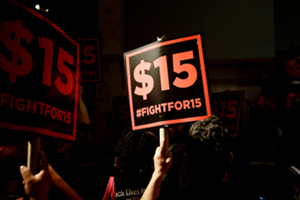 Most of your readership seems to be in relatively high-salary jobs but I have a question about lower-level jobs. I hope you think it’s worth covering. I see the federal minimum wage is in the news again because the new administration is trying to push through an increase. You published a Q&A column almost exactly a year ago arguing for a national $15 minimum wage (Who really needs a $15 minimum wage?). People expressed very strong opinions. A lot has happened in the past year — COVID, the booming stock market, the change in administration, unemployment. Do you think attitudes about raising the minimum wage have changed? Has yours?

I don’t like to veer away from the main purpose of Ask The Headhunter, which is to provide advice people can use to improve their job situation. But now and then an issue comes up that’s important for us to discuss and understand. The minimum wage is important to everyone because, no matter how much most readers here earn, we all encounter workers who do the lower-paying jobs that affect our lives every day. In fact, we rely on them.

I support a $15 minimum wage

In the January 15, 2019 column you mentioned, I advocated for a national $15/hour minimum wage. My view has not changed. I wrote:

“Fair-market compensation is an amount people need for shelter, food, transportation and other basics of life. That’s more than $70 a day where most people live… If your business can’t generate enough cash to pay a living wage, your business is going to fail for lack of workers. Shut it down now and get it over with.”

Some readers insisted that not all areas of the country should have their minimum wage set as high as $15, because housing costs are much lower in some places. But in an addendum to that column I showed why that line of reasoning is a straw man.

What happens if wages are legislated up?

Many business people have tried to make the case that they would bear the costs of mandatory higher wages, with the result that they would have to lay off workers. Or, they’d have to raise prices, which means they’d lose customers and potentially go out of business altogether. Any way we slice it, these businesses claim, the outcome would be fewer jobs.

As a dyed-in-the-wool capitalist I see this as a kind of creative destruction. When businesses shut down due to economic pressures, that’s not necessarily bad for the economy. It creates opportunities for better-run companies to replace them. As the tectonics of competition shift, workers move to new employers that create new and better job opportunities.

I’m not an economist, and I don’t run a restaurant that depends on $7.85 wages and wait staff that’s paid mostly with tips. I don’t pretend I can predict what a national $15 minimum wage will really mean. But I have opinions that I think are grounded in common business sense.

The backdrop on the minimum wage

Let’s set the stage with a report from NBC News about what the nation seems to think about raising the minimum wage:

“Despite the bitter political polarization in the United States today, public opinion polls of voters in red and blue states both show strong support for a higher minimum wage. An August survey found that 72 percent of Americans — including 62 percent of Republicans and 87 percent of Democrats — said the minimum wage should be high enough to keep full-time workers above the poverty line.”

But the same survey emphasizes that higher wages will cost a lot of people their jobs:

“The nonpartisan Congressional Budget Office determined in a 2019 report that raising the hourly minimum wage incrementally to $15 by 2025 could shave, at the median, 1.3 million jobs from the labor force, but would also lift 1.3 million people out of poverty and contribute an additional $8 billion to the aggregate household income of these families.”

One final statistic: While unemployment has held steady, job growth has stalled. Even without a higher minimum wage, in December employers cut 140,000 jobs.

What do you think about a $15 minimum wage?

If you were making wage policy, what would you do?