Over 60? Welcome to gig work and corporate greed

I clung to the middle class as I aged. The pandemic pulled me under 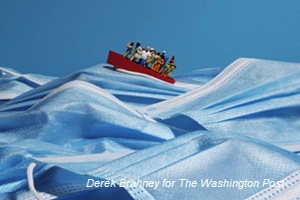 An eye blink ago, I was anchoring a nightly program for the cable news network Al Jazeera America. Before that, I had long tenures with “PBS NewsHour” and NPR. When I read warnings that workers could face sudden and catastrophic losses of income in their final years of employment, I was empathetic but concluded it could never happen to me. Then the wheels came off.

After Al Jazeera pulled the plug on its young network, I shoved down the rising panic, kept one eye on my bank balance as I started freelancing, and kept the other eye out for the next big thing. Like hundreds of thousands of men in their early 60s across the country, I had to get used to the idea that the marketplace might have already decided I was “done.”

“What’s this about? Corporate greed. Greed has a lot to do with it,” says Nick Corcodilos, the author of the Ask the Headhunter blog and an employment consultant.

Are companies wise to eliminate their most experienced and costly older workers? It certainly saves them money. Does it actually pay off? Share your own stories — but what I’d really like is your analysis about whether this is good for business and the economy. (In this highly charged time of partisan politics, I ask that we avoid partisan politics in our discussion — there’s plenty to say and debate about how this affects business, the economy, and workers. Let’s try to stick to that. Thanks for your cooperation.)