In today’s manufacturing environment, it’s skills and ability—not academic pedigree—that matter most. It’s time to update the blue-collar/white-collar approach to the workforce. 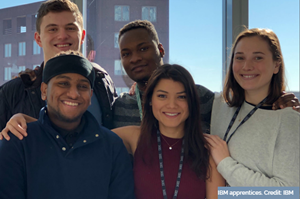 The concept is to look at ability, not academic grooming.

“Getting a job at today’s IBM does not always require a college degree. What matters most is relevant skills, sometimes obtained through vocational training. We are creating and hiring to fill ‘new collar’ jobs — entirely new roles in areas such as cybersecurity, data science, artificial intelligence and cognitive business.”

Another welcome trend is the emergence of regional partnerships for apprentices and other training. The best route for these partnerships is to work closely with companies to determine specific job needs. Community education should be aligned with the skills of open jobs.

News I want you to use item submitted by long-time reader Rick Manning.

Sounds great. I’m a big believer in a 4-year college education, but I also believe in apprenticeship. (See The Training Gap: How employers lose their competitive edge.) Rometty suggests taxpayers should pay for an Alt. college degree to custom-train workers for New Collar jobs at IBM. Who pays for what, and who’s really getting the benefits?

Should public education policy be driven by the needs of industry? Should taxpayers foot the bill to custom-train workers for IBM?