She got mugged in a stress interview

In the February 4, 2020 Ask The Headhunter Newsletter we consider the meaning of a stress interview. 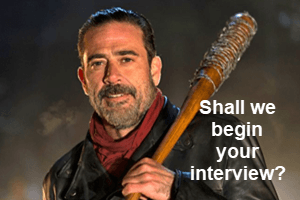 My daughter just went through what’s called a “stress interview.” She said she held it together, but came home and burst into tears. She didn’t know this was a thing. She’s had three such interviews in a row that left her feeling worthless in some unknown way. WHY is this a thing? It’s just mean. Why would anyone want to work with such awful people?

Please tell your daughter there’s nothing wrong with her. What she went through is the corporate equivalent of getting mugged. The victim feels that they somehow did something wrong to put themselves in that position.

Many employers’ hiring methods are rooted in HR consultants’ reports that advise using “best practices” – like stress interviews – in the name of “HR science.” But there is no science in intimidation, and abusing job applicants is not a good practice!

Is a stress interview a hiring method?

Let’s make an important distinction from the start. There is a difference between asking a job candidate to consent to participate in a work simulation that models the pressures of a job, and subjecting the candidate to an unexpected personal attack as part of an interview. Even in the former case, an employer is obligated to disclose the stressful nature of the job and give the applicant the option to decline any interview at all. For our purposes, the rest of this column refers to the latter scenario.

Job applicants like your daughter strive to be cooperative during the highly bureaucratic hiring process. I’m sure she trusts that, even if job interviews are fraught with anxiety, employers will conduct themselves with integrity. There is no business without trust, though we sometimes get hurt for trusting. Tell her to be careful around people who lack integrity, but not to stop trusting.

Many online resources purport to teach how to handle the pressure of a stress interview and how to prepare for it. But I don’t think a stress interview is ever justified. If it’s a “method” of testing applicants, then someone doesn’t know how to assess job applicants. I’m in agreement with this BBC article on the subject: The ‘stress interview’: a technique that goes too far? If an employer wants to give you a “front-row seat to the ugliest side of the company,” that’s your signal to run to the fire exit.

My advice to anyone who finds themselves in a stress interview is to calmly and politely stand up and deliver a message like this one:

“I’d never subject a fellow employee or a customer to such treatment for any reason, and I don’t tolerate it myself. Good luck finding someone who does.”

What kind of people do you want to work with?

Of course, that means no job. But there was no job there to begin with; just abuse and nasty people who have no clue that business is about trust, integrity, and respect. If the explanation is that the company wants to prepare you for working with abusive customers, for example, you should reconsider the job entirely. Would you consent to being tortured, so we could see how durable you are? Ask yourself, what kind of job do I want and what kind of people do I want to work with? (See Never work with jerks.)

Please tell your daughter to hold her head high and move on – to companies that have a standard of behavior as high as her own. To accept anything less is to debase and devalue herself.

In answer to your question, no one should want to work with awful people. Walk away from them. They are never worth the torture they inflict. Just because “it’s part of the interview process” doesn’t make it legitimate or acceptable.

I wish your daughter the best and I compliment you for not remaining silent about how she was treated. Good for you for letting out your ire. Sharing experiences like this is how we help others avoid them.

Now it’s time for your daughter to go find smart people worth working with.

How far should an interview go? What’s the wildest “test” you’ve encountered, and was it justified? Is there any way to conduct a legitimate stress interview? Is there a better way than I suggested to deal with one?