A face-scanning algorithm increasingly decides whether you deserve the job

HireVue claims it uses artificial intelligence to decide who’s best for a job. Outside experts call it ‘profoundly disturbing.’ 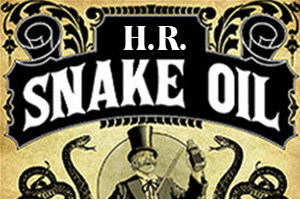 An artificial intelligence [AI] hiring system has become a powerful gatekeeper for some of America’s most prominent employers. Designed by the recruiting-technology firm HireVue, the system uses candidates’ computer or cellphone cameras to analyze their facial movements, word choice and speaking voice before ranking them against other applicants.

More than 100 employers now use the system, including Hilton, Unilever and Goldman Sachs, and more than a million job seekers have been analyzed. But some AI researchers argue the system is digital snake oil — an unfounded blend of superficial measurements and arbitrary number-crunching that is not rooted in scientific fact.

Human Resources executives have always been suckers for HR technology. “It’s AI”! But real AI experts say now HR has jumped the shark. Er, snake. Ever willing to swallow the venture-funded concoctions of database jockeys masquerading as recruiting experts, HR doesn’t give a hoot about science — or common sense when hiring. So bring in those candidates, scrub ’em up and get ’em ready! The venture investors behind HireVue are delivering digital snake oil, and HR is holding the funnel. Are you ready to swallow it? We’ve covered this before, but the story keeps, uh, coming up.