In the May 21, 2019 Ask The Headhunter Newsletter a reader fails to see that the problem is jerks. 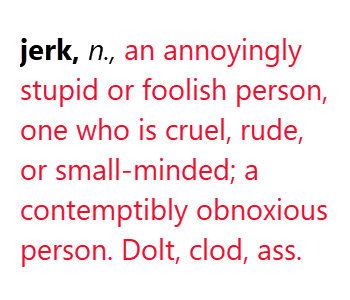 I need help with a recent job interview. The position was customer service work in a software engineering office setting. This is a start-up company with an 18-month history. I was interviewed for 3 hours by 5 people including the CEO and COO. The CEO asked me, “Why is your English so good? You don’t have an accent?” I have an ethnic name and I am a woman in a male-dominated field. Unbelievable! Then he asked me where I was born. Right here in this city, I said. The guy was speechless, puzzled. But how could that be? How should I respond to this?

You must decide for yourself, but I’ll share the advice Gene Webb, my mentor at Stanford, gave to me and his students many years ago: Never work with jerks.

How we deal with jerks

The first time Gene Webb shared his rule about jerks I of course understood it — intellectually. But it took me 25 years to accept it, because we rationalize working with jerks. We all instantly know a jerk when we encounter one. Then we make a profound and very stupid mistake.

We tell ourselves that, “Dealing with jerks is part of the job. I just have to do it.” It’s so much a part of our social and work culture that articles and books abound and preach that, “There are jerks everywhere. We must learn to work and live with them.” We’re told that dealing effectively with jerks is a skill that must be learned and practiced.

None of it is true, yet we knowingly walk ourselves into a hornet’s nest only to act surprised when we get stung.

I’ve dealt with jerks most of my life. Like you, I was proud that I knew a jerk when I encountered one.

Rule #1 is to recognize a jerk and accept the fact.

That was when my “dealing with jerks” skills kicked in. I could deal with the worst of them. But that wasn’t Gene’s instruction. Gene didn’t say, “Deal with jerks.” He said don’t work with them. Ever. That was very difficult for me to act on.

I finally learned there is no reward in dealing and working with jerks. I got hurt one too many times. It had become exhausting to accommodate yet another jerk. Jerks depend on our ability to deal with them. You can’t win with a jerk when you concede to be around them.

I quit two jobs in rapid succession before I realized my pain was caused not by me, or by circumstances, but by two specific people. In the end, Gene’s truth hit me extra hard because the second jerk had surrounded himself with more jerks. It was like showing up every day to a Jerk Fest. Maybe I was lucky to be surrounded by jerks because what should have been obvious was now blinding.

So I finally started practicing what Gene Webb taught me: Decide whether someone is a jerk. Act immediately — don’t rationalize. Leave.

Listen to jerks once

Judge a manager’s sincerity about working together. Does she want to hire you because you can add something to the way the work is done, or does she want another interchangeable part for her machine? Listen carefully to what the manager says. You will hear either a mind interacting with your own, or a machine waiting to grind you up.

This book includes: “Avoid Disaster: Check out the employer,” “Due Diligence: Don’t take a job without it,” and “Judge the manager”

If you think you’re dealing with a jerk, pause, consider carefully and be brutally honest with yourself, no matter how much you “really, really want this job.” Do the calculation: Is this person telling you they are a jerk? If yes, walk away and don’t have any regrets. Jerks will always hurt you – maybe not for a month or a year or two, but they will hurt you.

(Legal recourse is your other option. You can hire a lawyer and pursue action against the employer for possible discrimination. It’s a long, costly path. For more tips about avoiding trouble at the end of the interview process, see 13 lies employers tell about job offers.)

The good thing about jerks is, they can’t hide it. Their jerk-ness slips out in little ways, like the comments this CEO made to you. He believes he’s entitled to give you a backhanded slap during your interview, perhaps to test how willing you will be to tolerate him in the years to come.

Here’s the hard part: You must listen when a jerk tells you they’re a jerk. Listen just that once and you won’t have to suffer.

Unfortunately, there is nothing unbelievable about how this CEO behaved toward you. “Unbelievable” is the fallacy his ilk rely on to convince people to take a job with their company anyway. It will all be very believable once he’s your boss.

Like I said, you must use your own judgment. But you asked my advice, so here it is: Find a good CEO to work for. This is not one. He just told you so. Listen to him.

There are lots of good, honest, respectful, smart people in the world. Find one of those to work with for the next several years. No jerk is worth fooling yourself about – because you will have only yourself to blame if you rationalize.