Job Market Madness: What do you say?

In the December 18, 2018 Ask The Headhunter Newsletter we take a look at the madness of the 2018 job market — 3 issues that made me crazy all year long. What do you say about these topics? 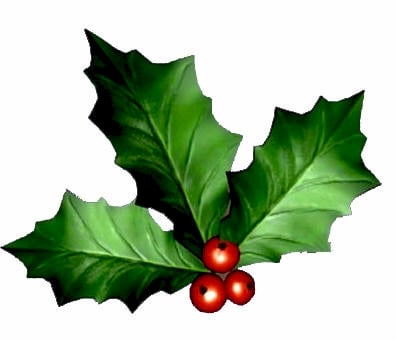 For my last column of 2018, I’m turning the tables and asking you for answers. Throughout the year, news about the job market set my head spinning again and again. (It’s still spinning.) I saved some of the juicier stories so we could review them now, as the year winds down.

Here are three controversial topics and my take. What do you say about them?

What do you say?

It’s become a perennial issue in the job market: the constant, wild claims by employers that there’s a talent shortage because today’s workers lack the right skills. (See News Flash! HR Causes Talent Shortage!) My take on this is that employers are full of crap, and my take gets credence from Wharton labor researcher Peter Cappelli.

Three years ago I wrote about The Training Gap: How employers lose their competitive edge. I cited Cappelli’s research, which strongly suggests that while companies complain today’s workforce lacks up-to-date skills, employers themselves contribute to the problem. Cappelli notes that training and employee development budgets were slashed long ago:

“American companies don’t seem to do training anymore…the amount of training that the average new hire gets in the first year or so could be measured in hours and counted on the fingers of one hand.”

“Fifty-five percent of U.S. employers surveyed by ManpowerGroup this year said they were providing additional training to cope with talent shortages.”

Well, they’re not. Cappelli claims — and I agree — that the “talent shortage” employers cry crocodile tears over is at least in part due to their failure to pay competitive wages and salaries. The same Manpower survey agrees:

“Only 26 percent [of employers surveyed] said they were offering higher salaries.”

What do you say? Are you seeing employers deliver more training and education to workers? Are employers making higher job offers — and paying higher salaries — to get and keep workers who have the “necessary skills?” What responsibility do companies have to educate their employees and new hires?

Tell Us Your Salary!

You already know my rule: Never, ever disclose your salary history to an employer. But the “news” is full of advice that hurts job seekers.

If you cough up your current or past salary information, it will be used to effectively cap any job offer. You’d be helping an employer negotiate against your best interests!

In a recent advice column, The New York Times explained How to Be an Ace Salary Negotiator (Even if You Hate Conflict). There’s some good advice in that article. But career pundits always seem to sell out their readers when employers and HR managers turn up the pressure.

Columnist A.C. Shilton says employers expect you to negotiate, so you shouldn’t be afraid to, as long as you view the negotiation as a discussion rather than a confrontation. I think she’s right:

“There is no obligation — legal or otherwise — to disclose this information, so your first move should be to parry this question to see if your potential employer will throw out the first number.”

But then Shilton chokes right where most job applicants choke:

“Still, read the room: Sometimes you’ll just have to cough it up.”

Shilton then cites an expert from the American Association of University Women who recommends double-talk rather than a forthright “No dice!” when the personnel jockey “in the room” demands your salary information. Here’s the script the AAUW expert says you should recite:

“This position is not the same as my last job, I’d like to discuss what my responsibilities would be here and then determine a fair salary for that job.”

Practice giving this response until it feels like second nature, says Shilton. In other words, force yourself to talk to the hand. Cave in.

But the estimable New York Times isn’t the only advisor telling you to take the salary sucker punch in a job interview. On CNBC.com, ace business expert Suzy Welch leads job seekers right off the negotiating cliff.

In What to say when a job interviewer asks, “What’s your current salary?” Welch warns that withholding your salary history “is no way to start a relationship.”

“The best way to secure your place at a new company and advance your career is to simply tell the truth.”

Why? Because, says Welch, “the decision to share your salary is worth the risk.” #GimmeABreak.

Men & Women ALL Get Lower Pay

The controversy about equal pay for women met #MeToo in 2018, but the men still don’t get it. (See Don’t blame women for the gender pay gap!)

On September 14 this year, Jeff Stein reported in the Washington Post:

“The gender pay gap has begun narrowing over the last four decades — and women’s earnings are now closer to men’s. But that is not only because women are doing better. The trend is also in part because men are earning less. Earnings for men have fallen in the decade since the recession, and are even below levels for much of the 1970s and 1980s.”

From ‘Not doing better than their fathers’: Men’s earnings have fallen since 1970s, Census Bureau says. 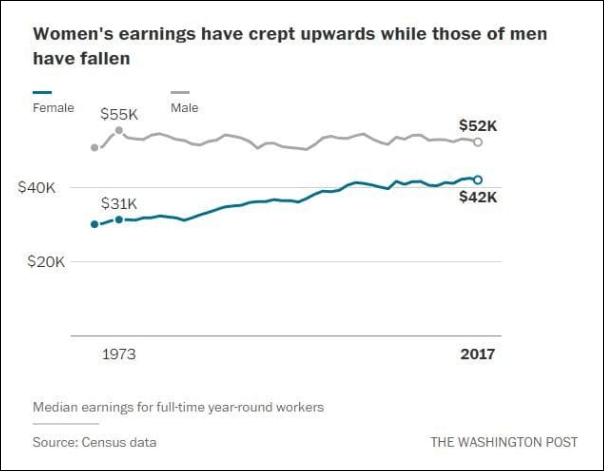 Yes, guys, that means #YouToo. Everyone’s getting screwed. I refer you back to Wharton’s Peter Cappelli, whose analysis of decades of data suggests employers own the “talent shortage” for three reasons.

All year long I’ve been running into data that fully support Cappelli’s contention that companies’ labor woes are due in large part to low pay — also known as greed. 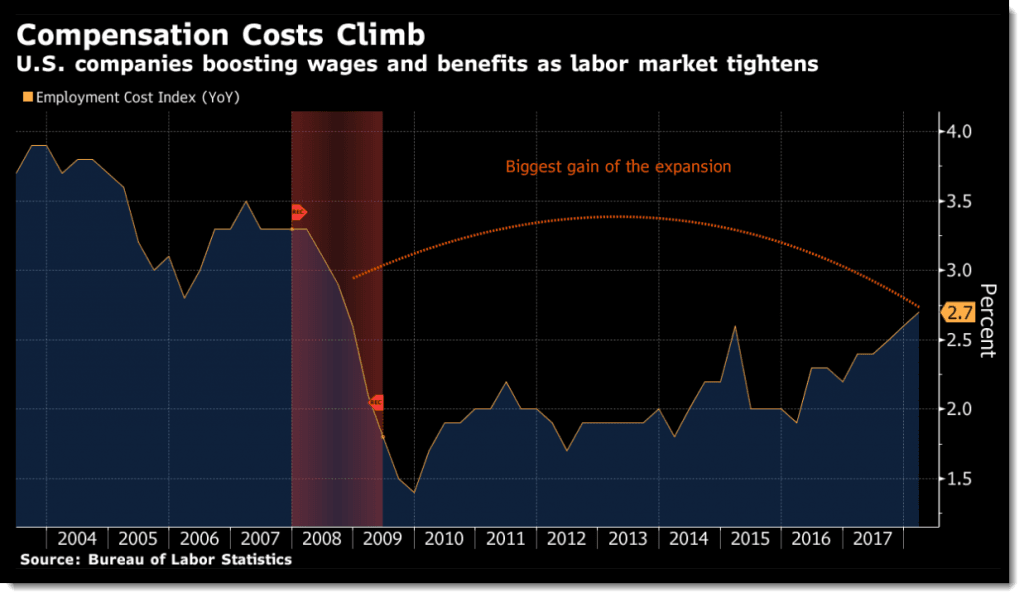 That red line — “Biggest gain of the expansion” — may be the biggest misnomer of the job year. “Pay still hasn’t recovered” would be the more honest tag for the failed compensation recovery.

What do you say? Did you know that real pay is actually lower for men, and unfairly low for women? Is it time for #UsToo? Have you ever calculated what’s happened to your “real earnings” since you started working? Why is this happening in a booming economy?

I hope you’ll chime in with your answers and opinions about these three topics that combine to create job market madness!

This is the last Ask The Headhunter column for 2018. I’m taking a couple of weeks off for the holidays! See you next on January 8, 2019! Here’s wishing you a Merry Christmas and a Happy, Healthy and Prosperous New Year — and all the best for whatever holidays you observe this time of year!